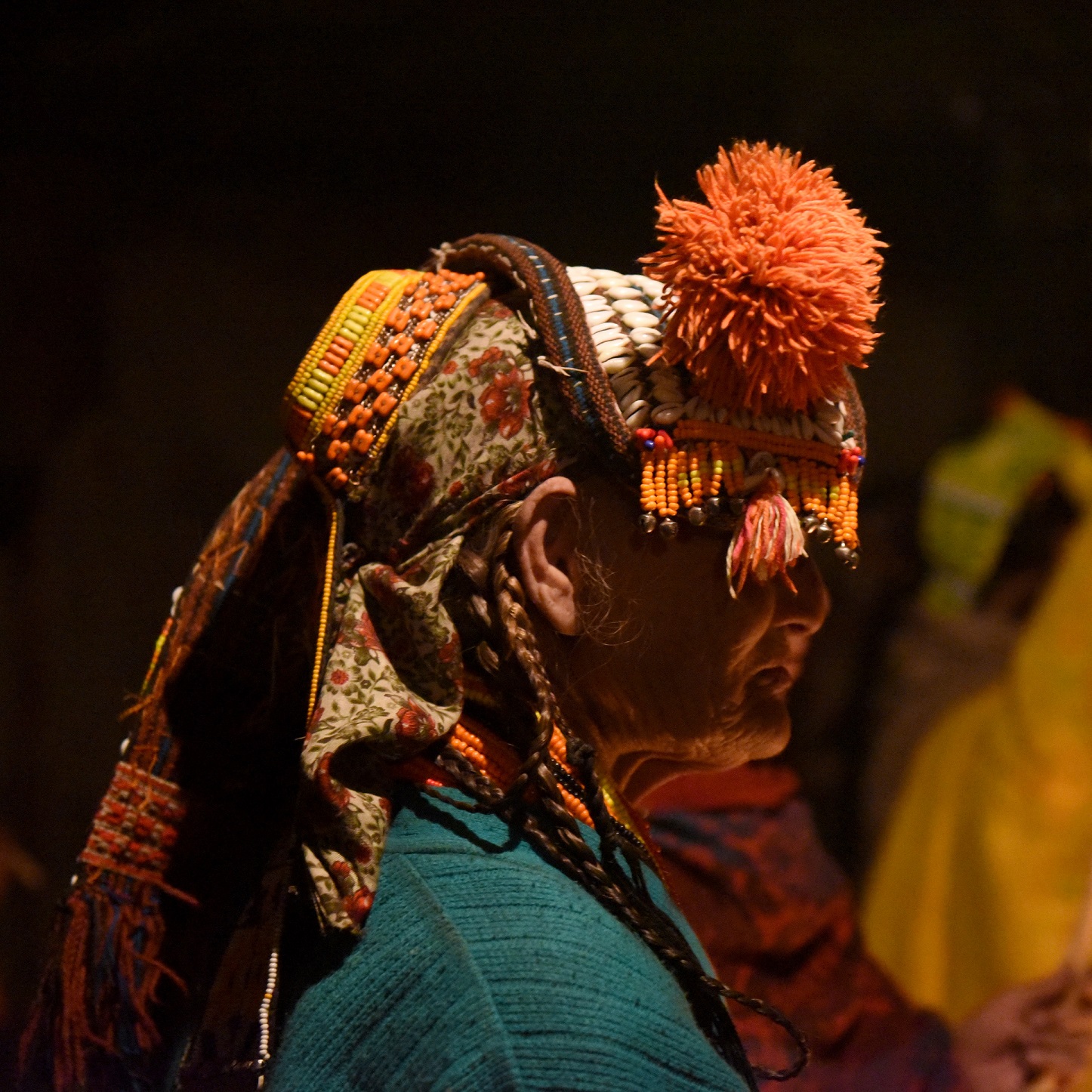 38-year-old school teacher, Iqbal Shah was only 11-years old when his parents converted to Islam, though he chose to retain his Kalash faith. While his parents were supportive – his journey was not an easy one. After his parent’s conversion, he mostly lived with his grandparents, who believed in the Kalash faith. Shah was devastated when his grandfather converted to Islam, a month before he died. After his grandmother’s death – Shah became the lone Kalash in a family full of Muslim converts, solely responsible for carrying forth the Kalash legacy.

“People say that we are merely dancers, swaying to drumbeats, but when I think deeply, I realize we (the Kalash) are free and without restrictions. I was born a Kalasha for a reason; hence it is right for me. God could have made me a Muslim by birth but he did not”, he says.

The Kalash valley is tucked among the Hindu Kush range in the Northern region of Pakistan. It is home to the Kalash or Kalasha people - an indigenous community based upon 15 villages in the valleys of Birir, Rambor, and Bamborat in Ayun Union Council. Kalash's unique culture and three main festivals Joshi, Uchao, and Chaumas have been a source of curiosity for outsiders for centuries. These festivals are not only manifest the Kalasha culture but also hold great religious significance for the community.

Growing up, the festivals were a bittersweet time for Shah, especially when he saw his friends celebrating with their families. His parent live in the same village, but haven’t participated in local rituals since their conversion. “But I celebrate five festivals in a year; three Kalash festivals and two Eids,” says Shah who lives with his elderly Muslim parents, Kalasha wife and five children “In all three valleys, we have these kinds of family,” he adds. 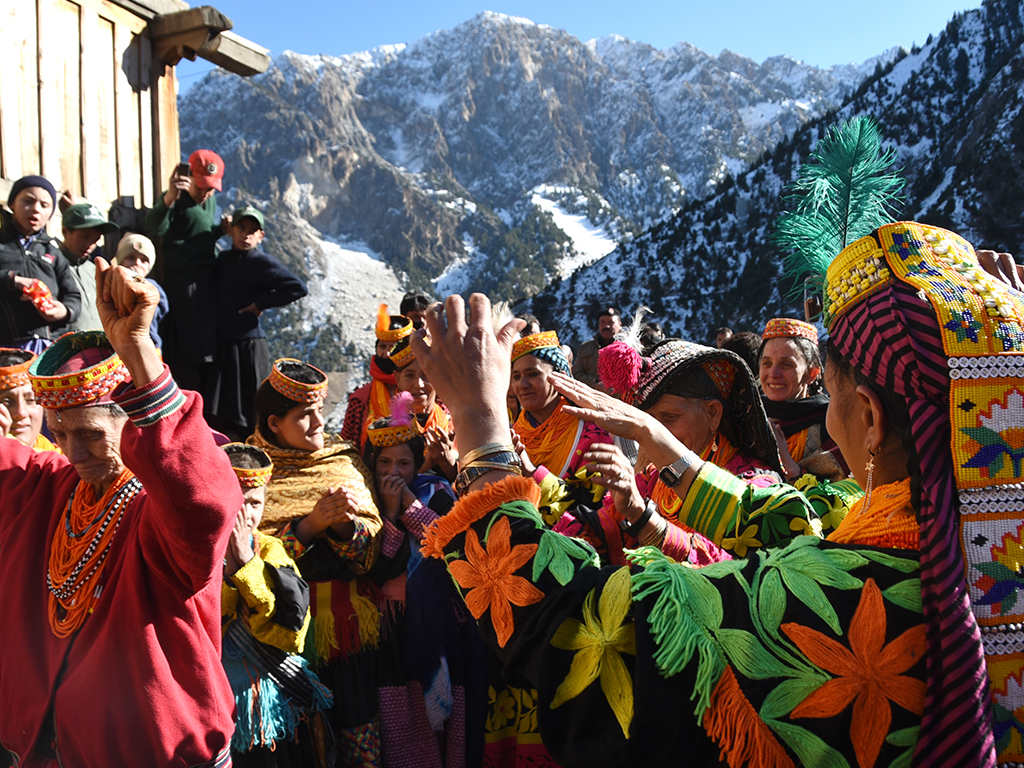 However, not everyone is lucky enough to be able to carve out their own space like Shah. Most people that convert, especially young girls, have to abandon their culture and families due to social pressures. Additionally, those who go and live in bigger cities for education and employment opportunities have to hide their Kalash identity.

Discriminations in education and employment

Sonia, a 29-year-old Kalash woman working in Lahore goes to work clad in a black burqa. A garment she had never before worn over her traditional, colourful and embroidered clothing and accessories. Due to her complexion and eye colour, her colleagues assume that she is a Pakhtun. She doesn’t correct them out of fear of discrimination and social ostracism.

“Here, one Muslim calls another an infidel. When they get to know that I am from a pagan tribe – I will have to justify my faith and culture all day long,” she says.

Although the Muslims and Kalasha living in the Hindu Kush valleys have shared relatively cordial relations with each other for centuries, there are consistent efforts to lure the Kalash away from their faith. Such conversion tactics are apparent in how religious indoctrination begins from institutions of early education. According to Sonia, growing up, all her teachers were Muslim and studying Islamiyat was compulsory in school. She recounts stories of teachers telling their Kalash students that they “are on the wrong path”. However, in Sonia’s opinion, the discrimination she grew up with was more subtle than the hostilities she faced after moving to the Punjab for higher education.

“For the first time, I realized that people do not like sharing food with non-Muslims. This did not happen in Kalash. We go to each other’s home and eat with one another,” she says. “It made me question my faith and wonder whether I am on the right path or not”.

“There was more preaching than teaching when I was studying at a college in Chitral city,” says Shah. He was under immense social pressure to convert from his classmates and teachers who tried to bribe him with money, foreign visas and even women.

A research report titled ‘Erosion of Kalasha’s Religio-Cultural Identity in Northern Pakistan: Context, Causes and Implications’ published in the FWU Journal of Social Sciences in 2018 explored various causes of conversions. According to the report, Kalasha men and women are also converting to have access to better social, political, and economic opportunities such as equal treatment at school and the workplace. Some people also convert due to poverty. “Kalasha customs are expensive, making it difficult for the poor to afford participation. Due to the shame they incur, they often convert”,says Abdul Khaliq, one of the only Kalash hotel owners in Bamborat valley. 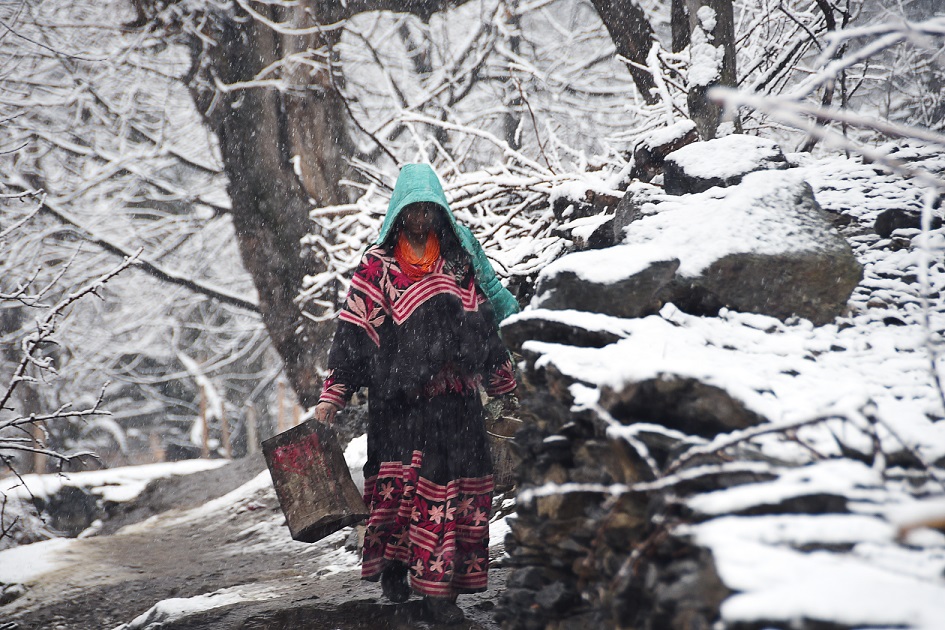 Kalash women are known for their intricately designed and colourful attire

The report further discusses how Kalash children are now hesitating to participate in the singing and dancing during festivals, and young girls are opting to wear a chador. Sonia says that tourists often harass young girls, by making and uploading their videos on the internet without consent. The girls are afraid to partake in their cultural rites and wear their traditional attire. Some regard this hesitation to participate due to external harassment, as slow poison for the Kalasha culture.

“We invite people from different religious backgrounds to our houses as a sign our of hospitality, in return, they try to influence our children, especially young girls, who have started finding flaws with their faith and are converting,” she adds.

Despite only constituting one percent of the total population in Chitral, the Kalasha are singlehandedly responsible for the tourism related economic boom in the region. However, while they are attracting the tourism, the Kalash do not enjoy a substantial share of the economic benefits. Out of thirty-two hotels in Bamborat valley, only six belong to members of the Kalash community. Overall, non-Kalash residents and non-native companies are profiting from tourism while the Kalash community bears the brute of environmental and cultural degradation. “Apart from a handful of Kalash women who sell handicrafts, most businesses are owned and operated by the non-Kalash. They own most hotels, shops and means of transport”, says Khaliq, “some people come to Kalash for the festivals, but chose to stay in non-Kalash hotels due to religious prejudice, which is pedaled by non-Kalash hotel owners”.

Shah estimates the inflow of thirty to forty thousand tourists in the vales annually, while festivals are the busiest times. Approximately four thousand cars enter the valley, often creating road blockages along the single dirt road which connects the Kalasha areas to Chitral city. Often times communal grazing land, such as the ones in Karkal village are used as parking lots, which destroys most vegetation. 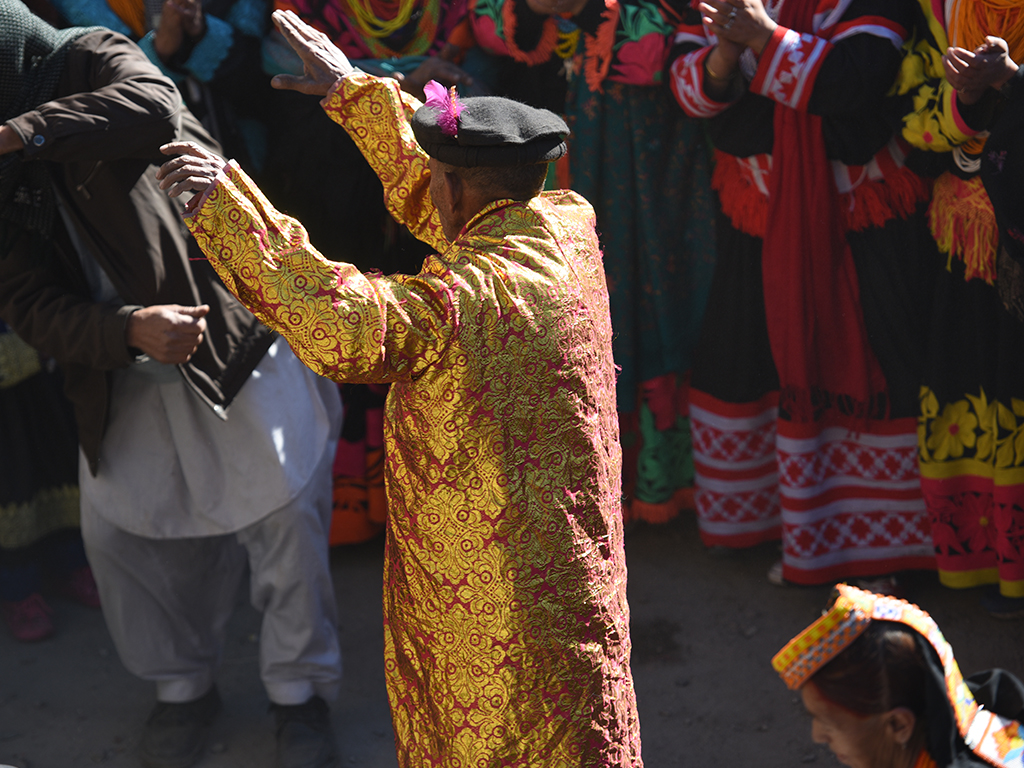 The Kalash come together to sing and dance

“Tourists leave our home littered with trash, and destroy grazing lands. We have to organize cleaning campaigns with school children. If such treatment of our homes and land continues – Kalash will finish”. Shah furthers says that, “We will lose our religion, traditions of hospitality and humility alongside the trees, land, mountains and rivers”.

Unfortunately, the uptick in tourism at Kalash in the past decade has done more harm than good for the Kalasha. While non-Kalash entities are reaping the benefits of tourism activities, the Kalash have incurred heavy losses from an environmental, cultural and religious onslaught which threatens their very existence. Khaliq believes that the biggest threat to the Kalasha existence is selling and leasing their ancestral lands to tourism mongers.

Srosh Anwar is a freelance journalist. She has special interest in Rights, culture, minorities and environment.