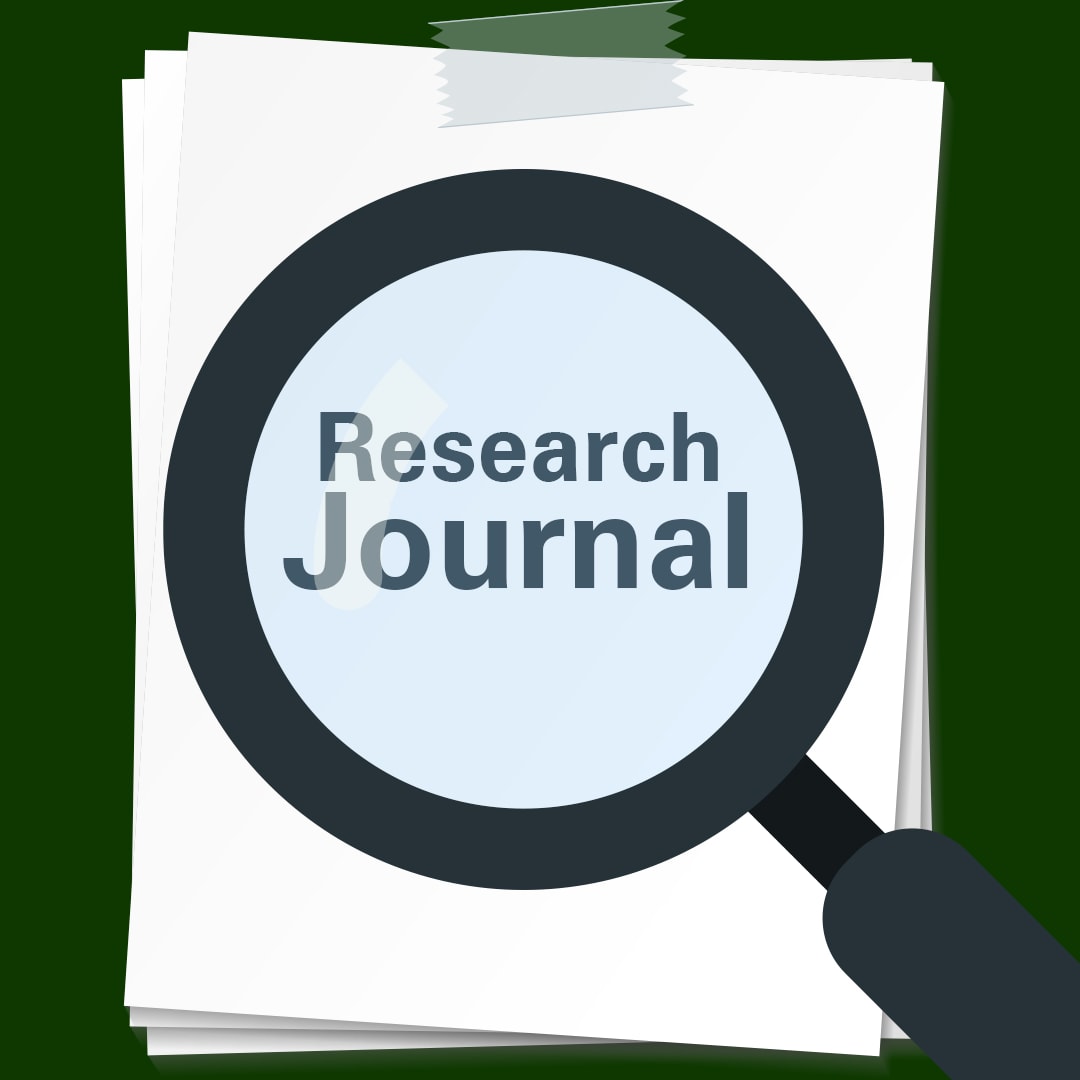 Hafeezullah Khan is the patron-in-chief of several research journals being published in a variety of fields such as political science, sociology, law and linguistics. According to the website of Humanity Publications Private Limited, the company that publishes these journals, their total number is 11. The company also claims that it has published 409 articles written by 1040 writers and it has 2369 reviewers at its disposal.

The Higher Education Commission (HEC) has also approved the publication of ten of these journals but, according to HEC, their publisher is not Humanity Publications but another entity called Humanity Only. This entity is not registered with the Security and Exchange Commission of Pakistan (SECP), as is required by HEC, but its button is available on the websites of all the journals published by Humanity Publications. A click on this button shows its aims and objectives but there is no such information available as to who runs it and how it is linked to Humanity Publications – except that they have the same postal address and phone numbers.

This button also mentions a Humanity Research Council which, in turn, is shown to be a part of something called Humanity Development Society. A council on interfaith harmony and another on sport development, too, are a part of this society which also includes three organizations – one each for youth, social welfare and media. There, however, is no reference anywhere to where these organizations are operating and who the people associated with them are.

When Sujag dialed a phone number given on the website of Humanity Publications, it was Hafeezullah Khan who answered the call. He says he has been publishing the above-mentioned research journals for the last six years. When he is reminded that at that time he was a first year student of an MPhil degree at political science department of the Abdul Wali Khan University Mardan (where he is now working as a lecturer), he says: “Being educated is not a necessary condition to publish research journals. HEC has some other criteria for this and we meet that.” 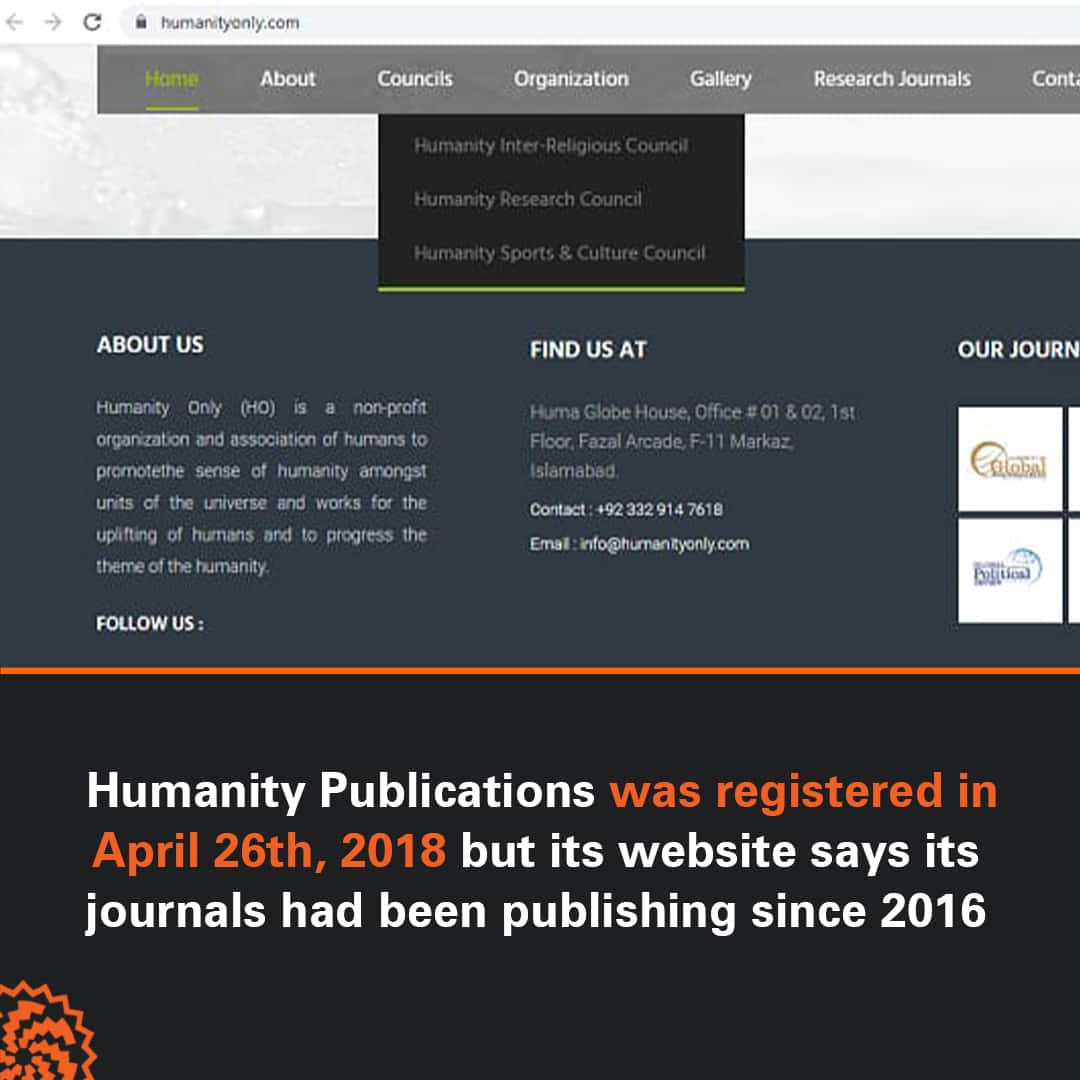 According to these criteria, the aims, objectives and scope of a research journal should be clearly defined. The journal should also have a distinct name, an international standard serial number (ISSN) and a URL verified by the global entity that registers ISSN. It should also clearly mention on its website if it charges any fee from research writers, what is the source of its funding and what is the procedure it follows to accept research for publication. Equally importantly, it should be published regularly.

Humanity Publications got registered with SECP on April 26, 2018, though its own website claims that it has been publishing journals since 2016. The company, however, has no formal institutional arrangement for its governance. According to SECP, it is owned by a lone individual.

A board of directors was mentioned on its website till the afternoon of December 24, 2020, though the photos and bios given there in were all dummies. That mention has now disappeared.

Hafeezullah admits that the photos and the names of the directors were not real – and were “placed there by the company which provided him the website domain”. According to him, this is because “our website is still under construction.”

Another serious omission from the website of Humanity Publications is that it provides no information as to when, how and from whom it has received the mandate to carry out research. Similarly, it carries no information about Humanity Publications’ financial resources and does not say if the company charge any fee from writers. Three buttons mentioning guidelines for writers, editors and critics can be found on the website but they cannot be opened.

Furthermore, two journals available on the website do not have a defined scope, two have no ISSN while four do not have an ISSN for their online editions. More importantly, none of them is being published regularly. 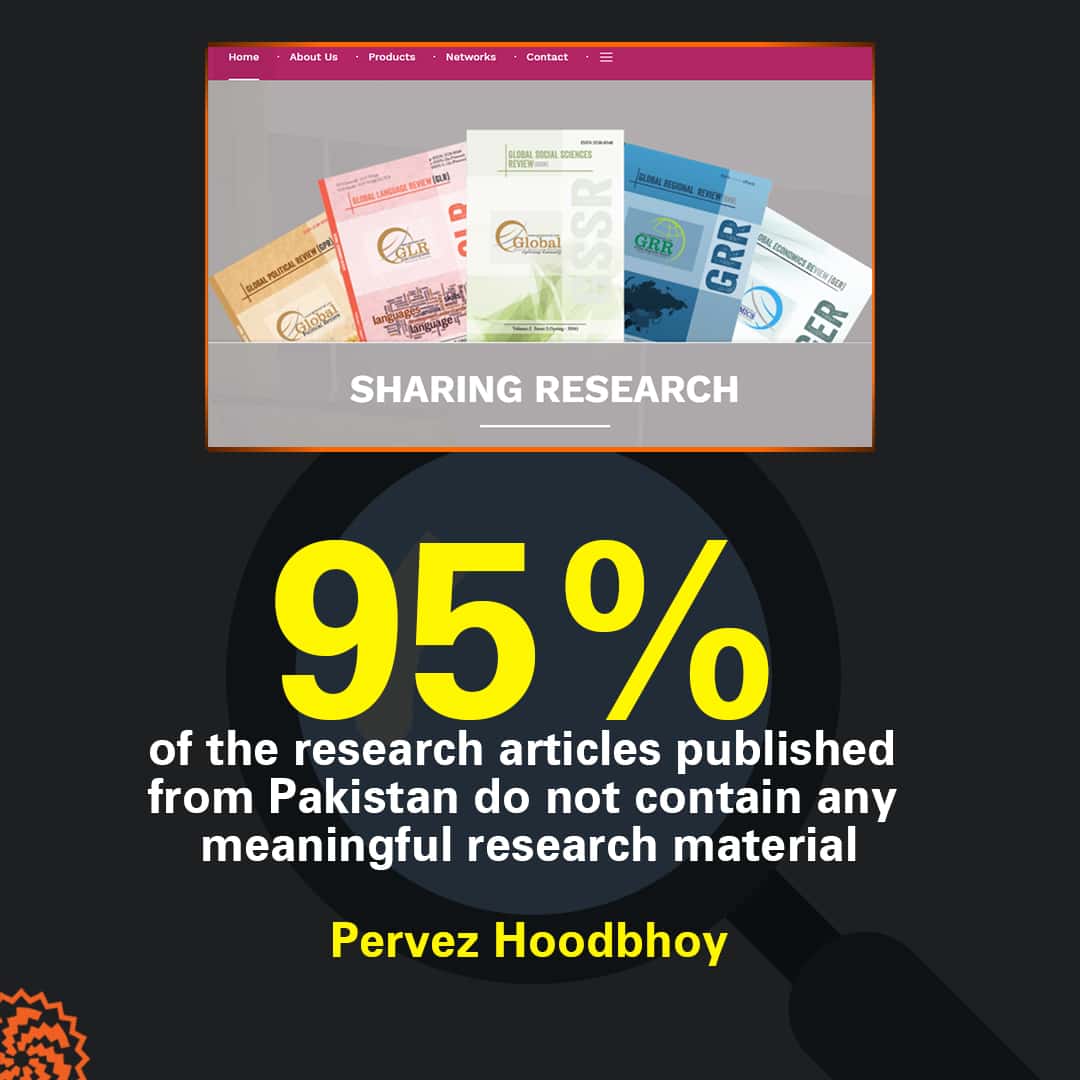 Only one journal, Global Social Sciences Review, has twelve published issues all of which can be opened online. This journal also has an editorial advisory board though the very first name in it is either incorrect or just fake.

Although the majority of this board’s members belong to various African nations and other countries of world, some Pakistanis are also included in them. Sujag contacted two of them -- Dr Ejaz Ahmad khan and Dr A Z Hilali.

Dr Khan is a former professor of international relations at the Peshawar University. He says he does not know anything about Humanity Publications though the name of the journal, Global Social Sciences Review, sounds familiar to him. He, however, states that nobody has ever asked him to join its editorial advisory board.

Dr A Z Hilali, a former head of the political science department at the Peshawar University, admits that he has given the permission to include his name in the board but he hastens to add that he has no way of knowing if the journal is working in accordance with the HEC rules and regulations. Ensuring that, he says, “is HEC’s job”.

The black market of research 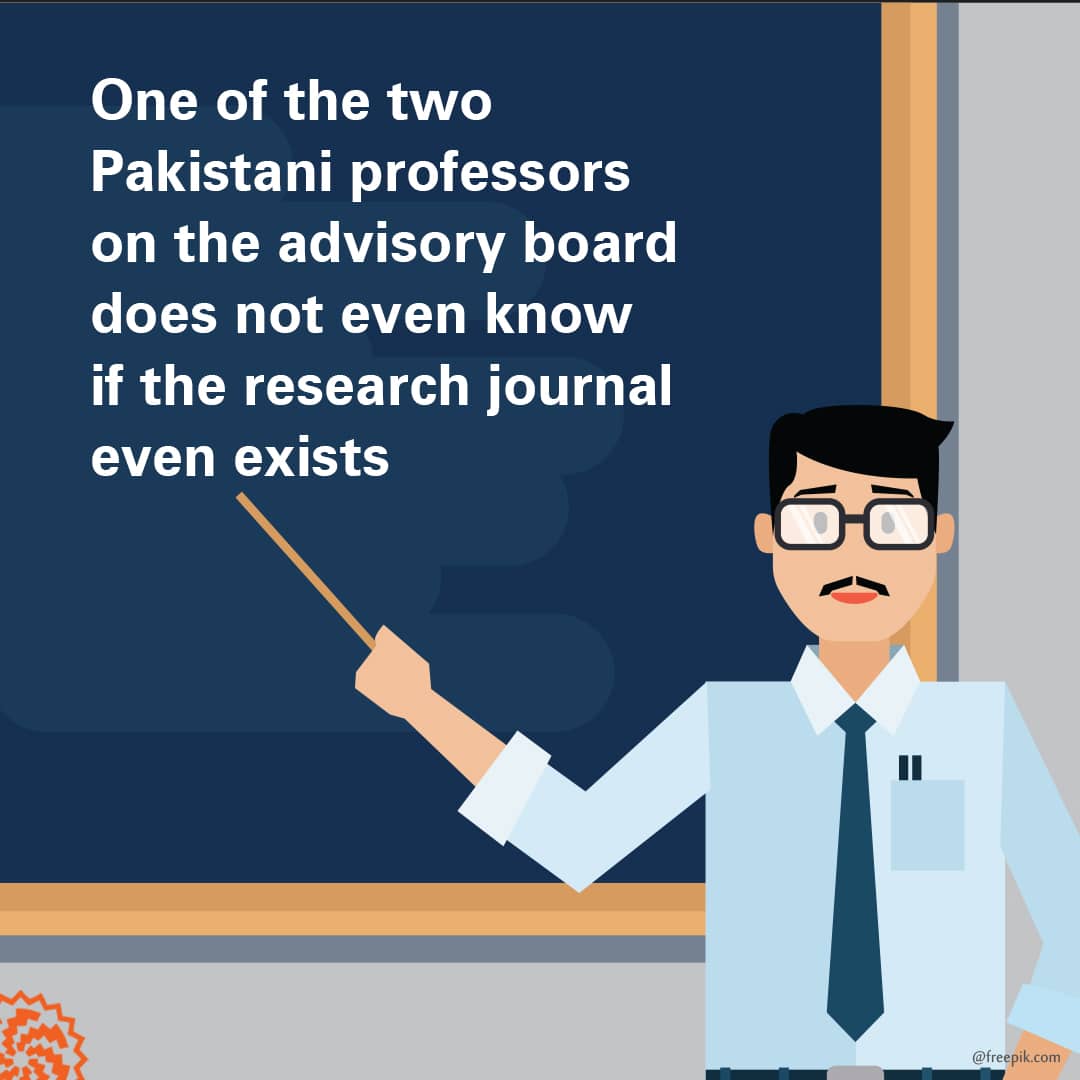 All the journals published by Humanity Publications fall in Y category.

Dr Muhammad Umar, who works at a nanotechnology research centre in Queensland, Australia, knows several other journals published by companies that exist only on paper. He is personally acquainted with at least one individual who publishes two HEC-approved research journals while being a member of the technical staff at a medical university in Punjab.

He says such publishers work on commercial bases. If you give them money, he says, they will publish any research regardless of its standard. “If and when they are identified and the approval for their journals gets withdrawn, they restart their business under another name.”

Renowned nuclear scientist, educationist and analyst Dr Pervez Hoodbhoy goes to the extent of proclaiming that “the entire academic research system in Pakistan is a fraud”. He claims that 95 per cent of the research papers published from Pakistan have no useful material in them. These are written only as a way to get promotions, he says.

Dr Faisal Bari, who teaches economics at the Lahore University of Management Sciences (LUMS) and is also a member of the HEC board of directors, acknowledges that the system of approving and categorizing research journals suffers from many flaws. In order for this system to become trustworthy, he suggests, its details should not be kept secret but, instead, should be made known to all and sundry.

Since the publication of his first research paper in 1976, Dr Rehman has had 1207 research works, including books and patents, to his credit. In other words, he has completed a research assignment every 13 days during the last 44 years. 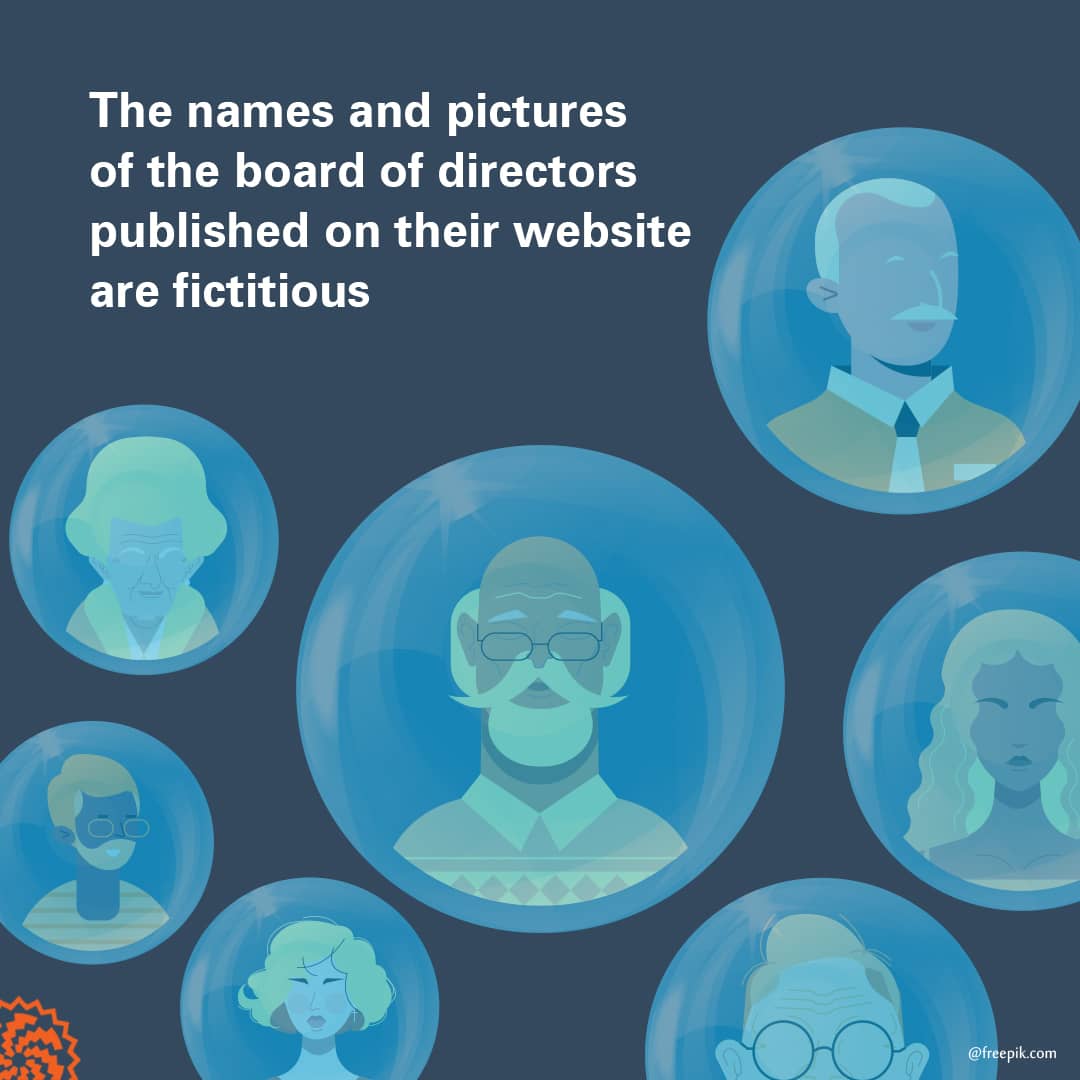 In comparison, renowned linguist and political scientist Noam Chomsky has published only 311 research works in the last 67 year – publishing one work in 78 days on average. This clearly suggests that Dr Rehman prefers quantity over quality when it comes to doing academic research.

HEC, the institution he has set up, has the same preference. This was proven recently when Clarivate Analytics, a US-based research company stated in its report that Pakistan’s research output in 2018 increased by 21 percent in comparison to 2017.

Dr Jalil Akhtar, an assistant professor at the University of Central Punjab, says the reason for this massive increase in Pakistan’s research output is that the promotions of teachers in higher education have been linked to the publication of research by them. Many teachers either get their low quality research work published in substandard journals by paying for its publication or they use their influence to have it published in better quality journals, he says.

“Linking promotions to the quantity of published research has forced teachers to get into a rat race which is hurting their creative abilities as well as the art of raising questions and coming up with novel ideas,” says Dr Akhtar. “This has also damaged their writing skills and undermined the scientific, social and economic importance of their research.”

According to him, many teachers take up the supervision of their students’ research papers with the sole objective to become their co-authors so that they can meet the conditions for their own promotions.

A research paper written by Dr Akhtar for a journal published by the Northwestern State University, in the American state of Louisiana, has been in the publication process for the last three years. In his estimate, it takes at least five months of work to write and publish a quality research paper. 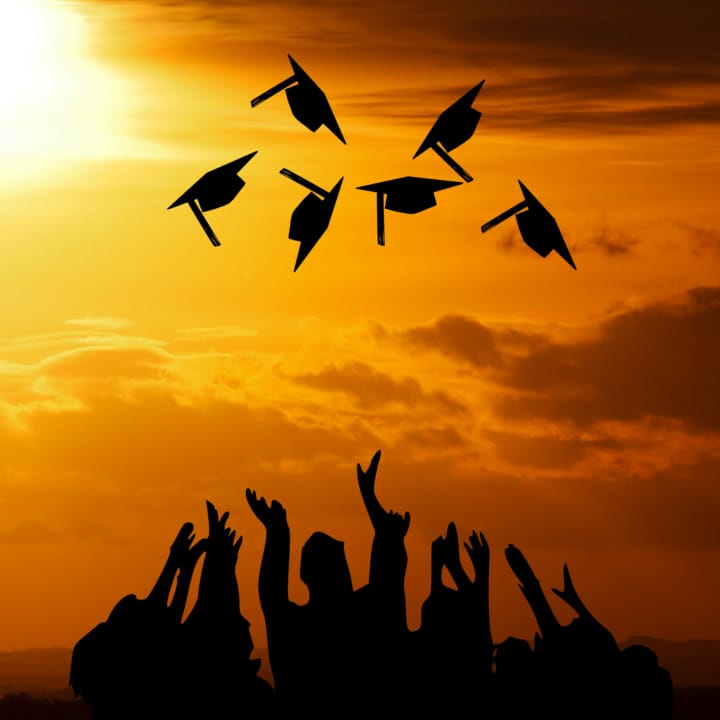 By this measure, an assistant professor needs a minimum of 50 months to be promoted to the post of associate professor. If, however, he or she can publish work at the same speed at which Dr Rehman’s work has been published, then they will need only four months and ten days to get that promotion.

Dr Tania Saeed, a teacher at LUMS, says the pressure to publish for promotion is not limited to the academia in Pakistan. “A culture of ‘publish or perish’ is prevalent all over the world,” she says.

She herself holds a PhD in education from the Oxford University and believes that the teachers’ need to stay in the race for promotions is a fundamental reason behind a drastic decline in the quality of academic research work.

For the last few weeks, a news report has been circulating in Pakistani media that the Stanford University in the United States has included 81 Pakistanis in a list of top two per cent researchers from across the world. Stories about the lives and works of some of these Pakistani researchers have also been published and broadcast in newspapers and television channels.

Barring a few exceptions, however, nobody has looked at this list critically. No one has asked whether the compilers of the list scrutinized the quality of the research or if they considered only its quantity. Similarly, there has been no enquiry into what kind of subjects these Pakistani researchers are associated with and whether it is advisable to compare the quality of research in science subjects to that in linguistics and literature.

Dr Pervez Hoodbhoy has also revealed in a column in Dawn newspaper that the Stanford University has never issued any such list. Instead, he points out, one of the four compilers of the list is working as a professor of medical data at that university.

Dr Hoodbhoy also discloses that the list has not been compiled on the bases of the quality of the research work -- or for its utility -- but is rather premised on the number of times a researcher has been referenced in the work of other researchers.

This means that any researcher can find a place in this list if their academic colleagues, students and friends keep referring to their research work in their own research. Ironically, even those references count which in reality have been made to prove a certain researcher wrong.

This report was first published by Lok Sujag on 5 Apr 2021, on its old website.