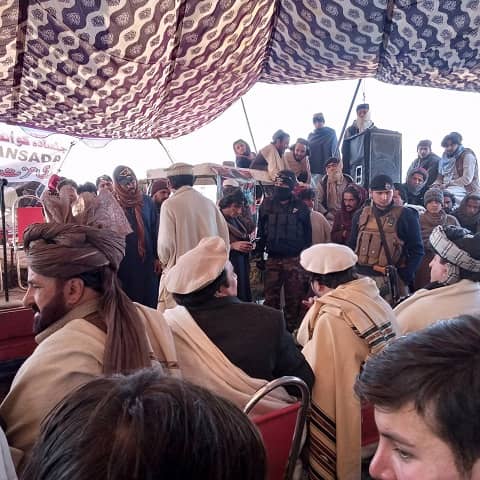 The Myth of Peace: In North Waziristan, community wants peace not compensation for civilian deaths

The Myth of Peace: In North Waziristan, community wants peace not compensation for civilian deaths

When a minor girl from the Utmanzai Wazir tribe in North Waziristan was killed in a clash between the militants and the military in December 2021, the tribesmen staged a week-long sit in. They blocked the main highway connecting the tribal district with Bannu, the neighbouring district about seven kilometres from Mir Ali, the second biggest town of North Waziristan.

The protesters demanded that the government investigate the murder of the girl Jan Sada and award punishment to those responsible for the murder. To ensure peace in their area, they said, such incidents should not take place again.

Jana Sada was a resident of Zeerani village in the Khesur Jungle area of North Waziristan. Around the time she was killed, her father Jameel Khan, 32, had recently returned from UAE where he used to work as a labourer.

Jameel said that at around 5 am on December 28, 2021, a clash erupted between the militants and security forces in the village. He said that like other villagers, his family shut down their doors to protect against someone from the warring sides barging into their homes to hide or seek refuge. Amid the ringing gunshots, a shaking Jan Sada approached her father saying she was afraid. Jameel tried to calm his panicking child, saying nothing would happen to them.

The military authorities ordered the locals to stay indoors once the firing died down around 7 am. However, around 3 pm, they made another announcement from the village mosque, asking all men to gather inside a house and women to assemble in a seminary.

Jameel said that his wife left for the seminary along with her children. It was there that a bullet struck Jan Sada in the forehead. Moments later, she passed away in the lap of her mother. Local tribesmen claim that someone from among the army men deployed on the rooftop and other parts of the seminary had fired the bullet that killed the girl. 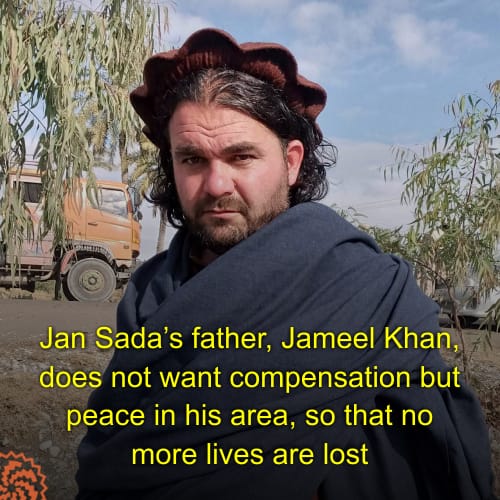 Following Jan Sada's death, military authorities went to her home to ask her family to take her body home. However, they refused to do so, saying they would only leave the seminary on the condition that all the villagers were allowed to go home. When this did not happen, Jan Sada's mother, four sisters and two brothers spend the night in the seminary along with her dead body.

Jameel said that around 2 pm the next day, they were allowed to leave for their homes and an hour after reaching home, they buried Jan Sada.

“I do not need any compensation from the government for my daughter's murder;  we just want peace in our area so no one else would lose a child,” said a dejected Jameel.

Written but not verbal guarantees

Addressing a press conference in Rawalpindi in January 2022, Major General Iftikhar Babar, Director General of the Pakistan Army's public relations wing, the Inter Services Public Relations (ISPR), spoke about the deteriorating law and order situation in North Waziristan.
He said terrorists from Afghanistan were easily crossing the border due to the area’s terrain and weather situation that had also delayed installation of the border fence in the area.

He said that following a major clearance operation in Dua Toi area of North Waziristan in 2021, the state's writ was restored there and work on the installation of border fence was also completed. He said that last year (in 2021) about 60,000 operations were conducted to eliminate terrorism all over the country, including North Waziristan.

However, the Utmanzai, one of the leading local tribes in North Waziristan, do not buy these claims.

Mir Kalam Wazir, one of the protesters who participated in the sit-in after Jan Sada's killing, said that incidents like her death were common in North Waziristan. After every such incident, he said, the locals took to the street demanding peace.

“Peace cannot be restored unless the military men are stopped from forcibly entering into people's houses and enforced disappearances are put to an end,” he said. 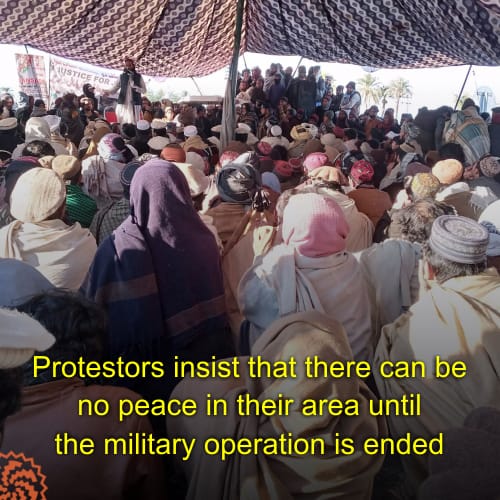 Mir Kalam Wazir was elected a member of Khyber Pakhtunkhwa provincial assembly in 2018 elections which he contested as an independent candidate. Before his election, Wazir was associated with the Pashtun Tahaffuz Movement (PTM). Like the rest of his tribe, he also demanded an investigation into the murder of Jan Sada and held her killers accountable. Wazir said that he would also take up the issue on the floor of the provincial assembly.

Ameer of Jamiat Ulema-e-Islam from Khesur in North Waziristan, Shakirullah was one of the local leaders who participated in the sit-in protesting the killing of Jan Sada. Shakir, 31 has spent years in exile like many others from the district, due to military operations in the district. “They brought us back claiming that peace had been restored in the district; however, every second day something shattering the myth of peace happens in North Waziristan,” he said.

He demanded the military to conduct another full-fledged operation in North Waziristan to restore peace. In June 2014, the military had launched Zarb-e-Azb, an operation against militants in the tribal district, displacing nearly a million people from North Waziristan. “We will even leave our homes once again but peace must be restored,” he said.

Regarding the sit-in, he said that it must continue till the government yields to demands for justice from Jan Sada's family and restoration of peace in the area. However, he made it clear that the guarantees must be in writing and should be offered by the Corps Commander Peshawar to the Utmanzai tribal elders.

Shakir said that he was insisting on written guarantees because the issue could be raised at the floor of assembly in case the promises were not kept.