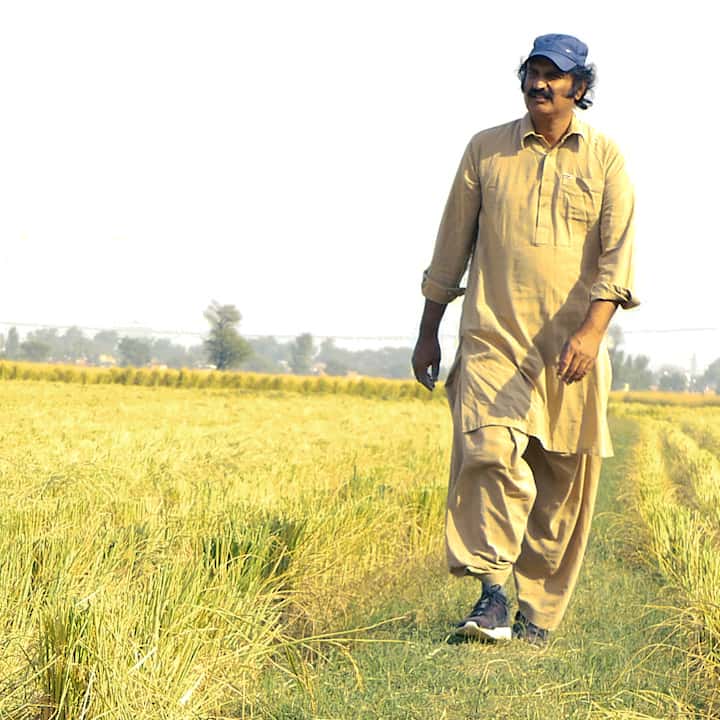 How to handle rice residue in central Punjab: A farmer's self-devised method to avoid farm fires

How to handle rice residue in central Punjab: A farmer's self-devised method to avoid farm fires

The road connecting Sheikhupura with Pindi Bhattian is hidden by a thick layer of dust. The houses built around it, and the people living in them, also feel wrapped in a coat of powdery dirt. The crops in the area similarly appear to be covered in soot.

Sultan Ahmed Bhatti appears in this dusty landscape as a ray of light.

His village, located south of Sukheke Mandi town, is part of Hafizabad district which is famous for its excellent rice. The district also comes on top as far as burning rice crop’s residue is concerned this year. According to a report released by the Provincial Disaster Management Authority (PDMA), the government officials had identified 1,415 incidents of field fires in Hafizabad as of November 9, 2020.

But Sultan Ahmed Bhatti does not burn the remains of his crop at all.

He mixes its stalks and roots left after the harvest into the ground and then sows the wheat seeds in it without any ploughing. He also does not use any chemical fertilizers in his fields. Nor does he spray poisons on his crops to kill pests and weeds.

Local farmers often make fun of him but he is persistently following his peculiar method of cultivation. “Five years ago, like other farmers, I would also burn my crop’s residues,” he says.

The most important reason for burning rice roots and stalks, according to him, is that farmers have only fifteen to twenty days to sow wheat after harvesting rice. If the sowing of wheat is delayed, not only does its production decrease but also the cost of fertilizers etc increases. Farmers, therefore, look for a quick and cheap solution to get rid of the rice residue and, over the last few years, they have found this solution in the form of field fires. 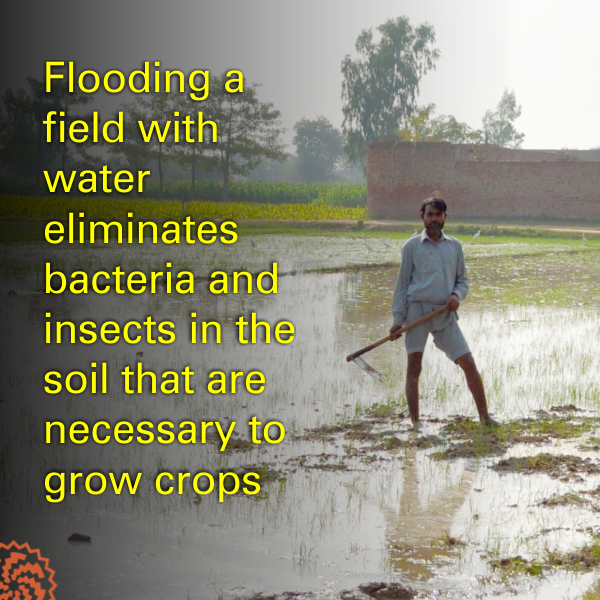 Back in 2015-16, Sultan Ahmed Bhatti began to look for alternatives. Although he had received education up to only intermediate, he began to study research reports written by experts on soil fertility and also made contacts with agronomists at various universities. At the same time, he started cultivation on a quarter of his 100-acre family farm without ploughing and using chemicals.

For the first three years, he suffered heavy losses but his yield exceeded that of other farmers over the next two years. Now he has started cultivating all his farmland by following his own method.

Explaining his ways of cultivating wheat, Sultan Ahmed Bhatti says: “This is very simple. Once the rice crop is harvested, I use a mulch machine in the fields to level the crop residue along the ground. Then, with the help of another machine (a no-till seeder), I sow wheat in the fields without ploughing them.”

According to him, sowing crops through this method costs only 1000 rupees per acre while the cost of sowing wheat per acre through traditional methods ranges from 7,000 to 8,000 rupees per acre. “This method of cultivation can also prevent environmental pollution and it preserves the natural organic structure of the soil which is essential for maintaining its fertility.”

Sultan Ahmad Bhatti claims he not only grows rice and wheat crops with this method but cultivates fodder crops using it as well. He also opposes traditional ways of irrigation, saying that flooding a field (called puddling) eliminates bacteria and insects in the soil that are necessary to grow crops.

Advising other farmers to adopt the same method of farming that he follows, he says: “If farmers gradually reduce the use of ploughing on their land, it will have lasting positive effects. On the one hand, doing so will reduce their energy costs and, on the other, it will give them an opportunity to fortify the natural structure of the soil.

But he realizes that it is relatively easy for large landowners like him to abandon the conventional method and adopt the alternative one, as he can either import the machinery required for it or make or purchase it locally. He can also absorb the financial losses caused by this method of cultivation in its early years.

But the number of large farmers like him is very small in Punjab. Small farmers -- who own five acres or less -- now form a huge majority of the province’s agricultural population. It is impossible for them to adopt this approach unless the government provides them with financial and technical support.

Sultan Ahmed Bhatti acknowledges this and says: “The government should provide cash or other financial incentives to small farmers to buy or rent machinery.”

Dr Tasneem Khaliq, an assistant professor of agronomics at Faisalabad Agricultural University, agrees with the farming style of Sultan Ahmed Bhatti. Regarding the disposal of rice residue in particular, he says: “We now have the machinery available that allows farmers to cultivate wheat without removing this residues from the fields.”

Another method, according to him, is to bury the rice residue in the ground so that it can be later used as organic fertilizer for the soil. “This will not only improve wheat production but also reduce cultivation costs.” 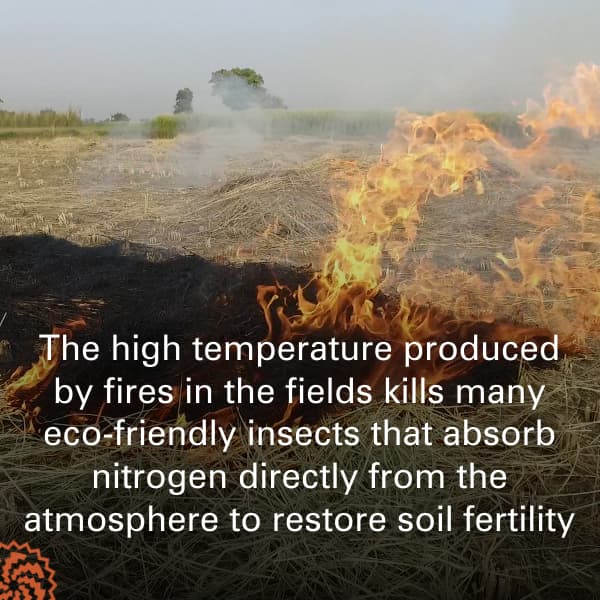 Explaining this, he says: “The rice plant contains a lot of organic matter which is an important source of nitrogen. It also contains potassium, phosphorus, zinc and cobalt which play an important role in maintaining the soil’s fertility. Due to their presence in the soil, crops do not need artificial chemical fertilizers and this reduces production costs.”

But when we burn rice residues, he says: “All these precious organic substances get scorched and we only get ash.”
In addition, he goes on, the higher temperature produced by fires in the fields also kills many eco-friendly insects that absorb nitrogen directly from the atmosphere to restore soil fertility.

Five years ago, like other farmers, I also used to burn my crop’s residue. For the first three years, I suffered significant losses, however, in the next two years, my crop yields exceeded those of other farmers.

After the rice is harvested, I use a mulch machine in the field that lays the residue on the ground. Then with the help of another machine ‘no till seeder’ i sow wheat for which I don’t need to plough.

The cost of sowing through this method is only 1000 rupees per acre whereas in the traditional method it reaches 8000 rupees.

This report was first published by Lok Sujag on 15 Nov 2020, on its old website.