A recipe for disaster: How Single National Curriculum will divide the country further along class lines
English
English 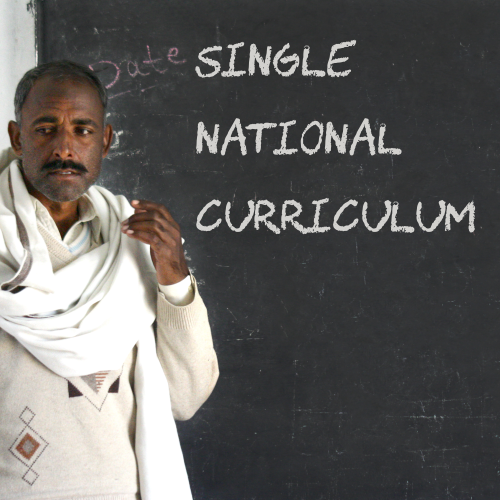 The decision by the Pakistan Tehreek-e-Insaf (PTI) government to implement a newly-minted Single National Curriculum in Punjab has endangered the future of Afzal Raza’s private educational institution.

He established the institution, named Fatima Jinnah Public School, in 1996 on Chand Rai Road in Chungi Amar Sidhu, a locality in southern Lahore. The area is mostly inhabited by labourers, handcart vendors and people working in government and private offices on low level positions. They cut down on their daily expenses to save money and then spend it on their children’s education.

Raza, therefore, charges a minimal tuition fee -- so that he can enroll a maximum number of students in his school. Till the end of 2020, total enrolment at his school – from kindergarten to matric classes -- stood at 450. He fears the implementation of the Single National Curriculum will have a seriously adverse effect on this number.

Books price is the first problem that his students will face in the wake of new curriculum. The government, Raza says, has withdrawn subsidy on publishing textbooks which will raise the prices of books being published under the Single National Curriculum. This will make it difficult for many people with low incomes to continue sending their children to schools, he adds. Due to this factor, over 40 students of his school have already discontinued their studies. 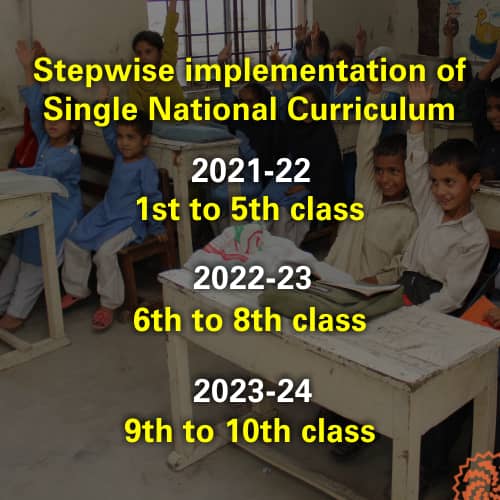 The new curriculum, he says, also includes a lot of new material but the schools with low earnings do not have adequate human and financial resources to teach that material. He criticizes the government for not imparting the required training to teachers in this regard. Similarly, he says, the government has not informed parents and school administrations properly about the objectives of the new curriculum.

These apprehensions have hindered him from adopting the Single National Curriculum for his school. For the same reasons, he claims, around 20 schools in Chungi Amar Sidhu are not complying with the government’s directives to implement it. This is despite the fact that the provincial education department has repeatedly warned them of punitive action.

One nation, one curriculum

Soon after coming to power in 2018, PTI set up a national curriculum council to implement one of its election campaign slogans. Comprising 400 experts with diverse experiences in education sector, the council was given the task of framing a nationwide uniform curriculum. The Single National Curriculum it devised is finally being implemented now.

This implementation will be completed over the next three years. During the first year, 2021-22, the new curriculum will be enforced in all primary classes. In 2022-2023, it will be implemented in grades six to eight. In the third year, it will be extended to grade nine and 10.

The government says the primary objective of its implementation is to ensure that all educational institutions in the country – including madrassas, state-run schools and expensive English medium private establishments -- teach the same syllabus. This, the government expects, will promote national harmony, patriotism and Islamic values. 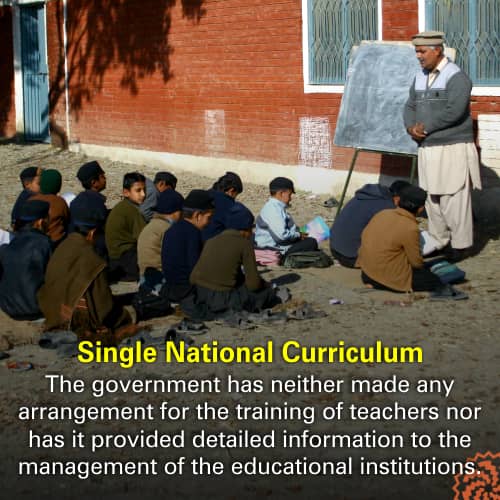 The government also argues the last national level curriculum was formulated in 2006 during the era of military dictator General Pervez Musharraf but, then, after the passage of the18th constitutional amendment, education was devolved to the provinces. Consequently, provincial administrations started formulating their own curriculum which, according to the federal government representatives, was so different in each province that it created a massive disparity in educational outcomes among students coming from different parts of the country.

Punjab School Education Minister Murad Raas also alleges that the curriculum devised by the provinces neither accorded with modern educational standards nor did its contents measure up to research and verification.

Addressing a press conference earlier this year, he said his party’s government is putting an end to different curricula in different provinces. The government, he said, has also ensured that the textbooks being made under the new Pakistan-wide curriculum carry contents that are thoroughly cross-checked and verified.

In retrospect, the first attempt to implement such a uniform curriculum across Pakistan was made during the regime of military dictator General Ayub Khan. In 1959, he formed the National Education Commission, headed by S M Sharif. Its apparent aim was to formulate a single educational system for all strata of the society. The commission’s report recommended that religious education be made compulsory and Urdu be declared the medium of instruction so that religious cohesion of the state and Pakistani nationalism could be instilled among the people of both East Pakistan and West Pakistan.

In practice, however, these recommendations further deepened the ethnic, political and economic schisms between the two parts of the country. Additionally, it strengthened social stratification in educational system because the affluent class started sending its children to expensive English medium schools. 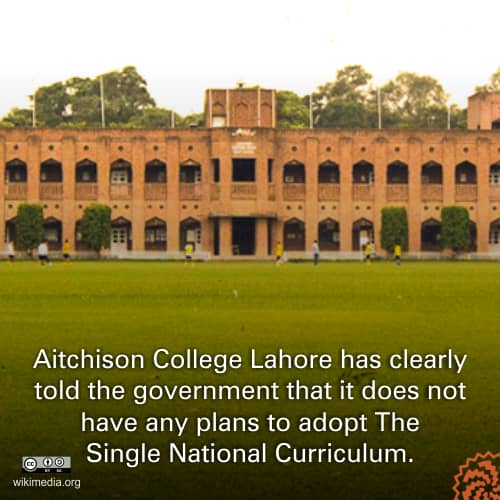 The PTI-formulated Single National Curriculum is facing the same kind of criticism. For instance, Sindh’s provincial government sees it as being repugnant to the 18th constitutional amendment and, therefore, has refused to adopt it. Likewise, the Balochistan government has maintained a complete silence over its implementation. Despite instructions from the federal government it has, hitherto, not taken even a single step to enforce it. Resultantly, the new curriculum is being implemented only in Punjab, Khyber Pakhtunkhwa and Islamabad – all three jurisdictions where PTI is in power.

But even in these regions, owners of thousands of private schools, just like Raza’s school, have started their educational year without adopting the Single National Curriculum. Administration at some of the elite private schools has, in fact, categorically told the government that they have no intention of following the new curriculum ever. The most prominent among them is Lahore’s historic educational institution, Aitchison College, where many members of Pakistan’s elite, including Prime Minister Imran Khan, have studied.

When news reports pertaining to the Single National Curriculum started doing the rounds at the start of this year, the principal of Aitchison College, Michael Thomson, sent a letter on 2nd February to the parents of students enrolled in his institution. An excerpt of the letter reads: “I am also aware of the anxiety among some parents over the ‘alleged’ impact of Single National Curriculum (SNC)… Aitchison has made its opinion clear and will continue to do so through appropriate channels.”

Months later, on 25th August, the Punjab Curriculum and Textbook Board politely requested the college principal through a letter not to teach those textbooks in his institution which are not approved by the government. On 7th September, school education minister Raas mentioned this letter in his tweet and wrote: “Zero exemptions. I will not let anyone challenge the writ of the government.”

The Aitchison principal responded to the tweet the same day, calling it “extraordinary”. In a letter to the parents, he further wrote: “I am sure parents who know me would understand that Aitchison is conducting its educational program in the right spirit.” 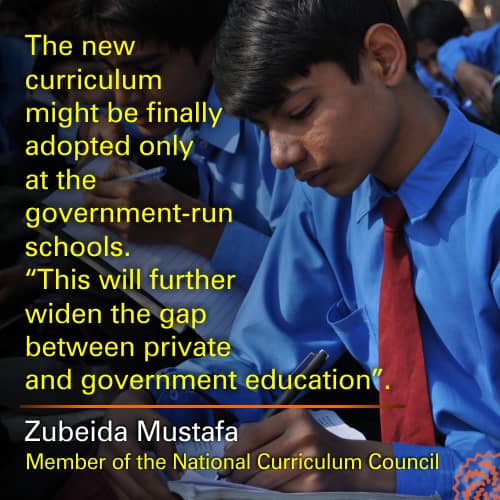 A day later Raas came down hard on those opposing the uniform curriculum. “The MAFIAS against the implementation of Single National Curriculum are launching personal attacks on me to deter me from my path. Make no mistake about it, SNC will be implemented in its full letter and spirit. These MAFIAS have only personal interests and Slave Mentality,” he wrote in a tweet.

After this altercation, however, the government softened its stance and some members of the National Curriculum Council started stating that consultation on the Single National Curriculum’s implementation was still in progress. This clearly meant there would be no action against elite educational institutions such as Aitchison College for defying it.

Pakistan Education Statistics 2016-17, a government database, puts the total number of primary schools in the country at 150,129: Out of these, 119,149 are run by the government and 18,753 are private institutions (which, as the Aitchison’s example shows, are highly unlikely to follow the Single National Curriculum).

Zubeida Mustafa, a senior journalist attached to daily Dawn and also a member of the National Curriculum Council, says the new curriculum might be finally adopted only at the government-run schools. “This will further widen the gap between private and government education,” she says.

Dr Ayesha Razzaque, a technical advisor at the Ministry of Federal Education and Professional Training, similarly believes the policy devised to implement the Single National Curriculum will further strengthening social divides. Under this policy, she says, private publishing houses have been allowed to publish textbooks after acquiring a No-Objection Certificate from the departments concerned. “They can publish books of any subject and for any class. In addition, they can also fix the book’s prices on their own,” she says. Consequently, the quality and price of the same book published by different publishing houses could be different, she says.

“In this situation, most of the government schools will not be able to recommend high quality books to their students who will then end up using the sub-standard ones,” she adds.