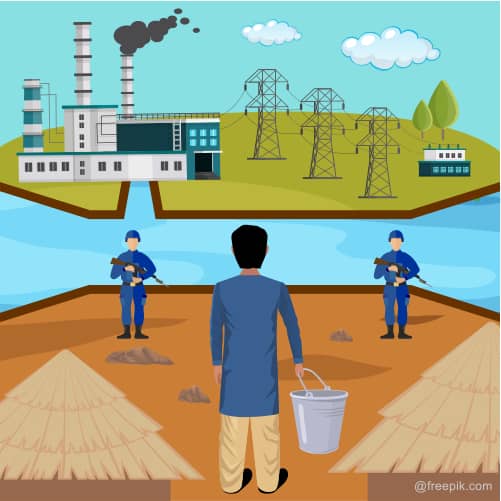 Taj Muhammad Soomra, 60, kneels down on the bank of a rain-fed natural pond to quench his thirst on a stifling hot afternoon in September 2021 at a settlement called Soomra Colony. “We use this water whenever rains fill this pond. Otherwise, we have to walk three to four-kilometer daily to a nearby locality to fetch water,” he says.

Soomra Colony is a part of Vijehar village, a cluster of rural settlements of about 3,000 houses some 30 kilometers north of Islamkot town in Sindh’s Tharparkar district. Mostly inhabited by Rajput, Soomra, Bheel and Kolhi communities, its residents rely mainly upon agriculture and livestock farming for their living.

Ironically, two government-built reservoirs do exist right in the middle of the village but its water-strapped community cannot use the water stored in them. The reservoirs have been built, primarily, to cater to the needs of two nearby coal-fired power plants to save their machinery from over-heating. 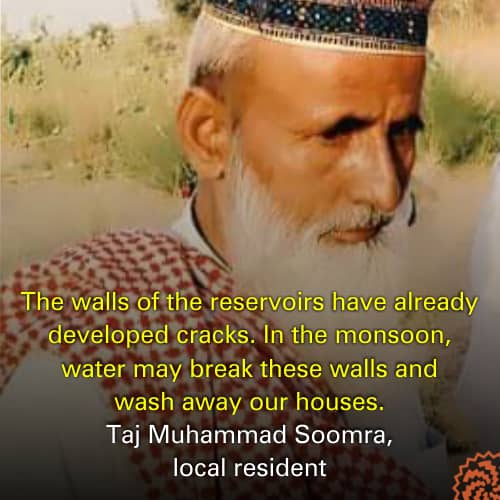 Presently, the first reservoir carries rainwater while the second one is empty as it awaits completion. Both of them will be eventually filled with water supplied from Farsh-Makhi area in Umerkot, a district in the north of Tharparkar. Initially, water from Farsh-Makhi will be brought through a canal to a reservoir in Nabisar wherefrom a 65-kilometer long pipeline will take it to the two reservoirs in Vijehar.

The locals are not happy with the construction of the reservoirs for a number of reasons. The foremost among them is their location: They have been built in the middle of residential areas.

Siddique Rahimoo, an environmentalist from Tharparkar, endorses their reservations. The reservoirs, he says, have made the life of locals miserable. “They have to travel much longer than before to access their cemeteries, pastures and farmlands,” he says.

The second reservoir has proved to be more harmful than the first in this regard because it has blocked the only direct road-link between Vijehar and Islamkot. The locals have taken up this issue with the authorities concerned time and again -- but to no avail.

The issue was raised even with the officials of the provincial revenue department who visited the sites of the reservoirs in 2014, says Soomra. “The villagers voiced their concerns and informed the officials that the reservoirs would divide the village halfway besides blocking their traditional routes and the local sewerage system,” he says. 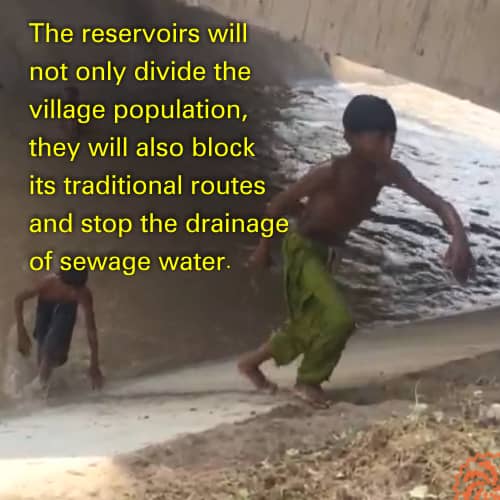 They are also not satisfied with the rates fixed by the government for their land acquired for the reservoirs. The government, according to Soomra, has acquired 840 acres of local land since 2014, including a 700-acre common pasture.

“The forced and unfair acquisition of this land stirred a series of protests by locals. Apart from that, we organized a protest camp and addressed a press conference in Islamkot [to get the issue highlighted] but none of our problems was resolved in spite of all that,” he says.

The disappointing response of the provincial revenue department and the district administration forced Soomra and his fellow villager Indar Singh Thakur to move the Mitthi Sessions Court against the builder of the first reservoir. They, however, had to withdraw the case while it was in its initial stage of hearing. This was because soon after the court put the builder on notice, one of his managers approached both the petitioners and threatened them of dire consequences if they continued to pursue it.

The case was finally withdrawn in May 2014 which paved the way for the acquisition of land against the will of the local landowners. But, though they unwillingly handed over their land for the construction of the first reservoir, they did not give up their demand for a fair compensation.

Far from accepting their demand, in 2019, the government started constructing the second reservoir as well. To resist that, the residents of Vijehar also re-started a series of protests to press the government to reverse its decision vis-à-vis the acquisition of their lands for it.

They staged a sit-in outside the office of a Chinese company which is supposed to use the reservoir’s water for the smooth operation of its coal-fired power generation plant. Additionally, they approached their elected representatives and urged them to play their due role in shifting the reservoir away from their village. They also called on the deputy commissioner of Tharparkar — the administrative head of the district — on July 13 last year and requested him not to deprive them of their traditional thoroughfares which would be swallowed by the new reservoir. 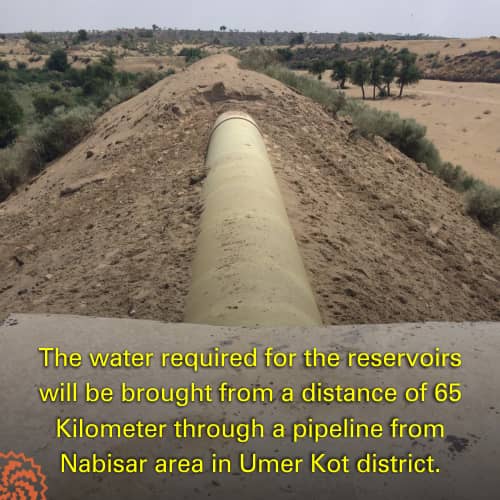 Consequently, the then deputy commissioner Abdullah Soho and sub-divisional officer of the provincial irrigation department, Saleem Maher, paid a visit to the site of the reservoir. They also held a public hearing on December 18 last year in which the villagers, once again, stressed the need for taking urgent measures to redress their grievances.

The deputy commissioner assured them that the second reservoir would be built only after their reservations were addressed satisfactorily. The villagers, he said, would also get the right of passage across the reservoir.
Not a single step has been taken to resolve the problems of Soomra Colony since that hearing. Instead, the reservoir’s construction is approaching completion in the meanwhile.

Soomra also complains that the ‘sub-standard’ construction of both the reservoirs could pose a major threat to the local population. He says that cracks have already appeared in their walls, resulting in the seepage of rainwater into the ground. The villagers fear that this seepage would weaken the foundations of the reservoirs which could, then, result in their collapse. In a worst-case scenario, the water stored in them could inundate the nearby localities.

Soomra believes that, in the event of such a disaster, 40 families from the Bheel and Thakur communities will be severely affected because they reside just 20 meters south of the outer wall of the reservoirs. Likewise, 70 families in the Soomra Peru settlement, living just 50 meters north of the outer wall of one of the reservoirs, would also be badly affected by the likely flooding.
Rahimoo verifies these concerns.

“The accumulation of rainwater in the reservoirs during the monsoon season triggered a wave of fear among the residents of Vijehar,” he says. During this season, he adds, “they remained constantly worried that the stored water might break the dykes of the reservoirs and sweep away their houses.”