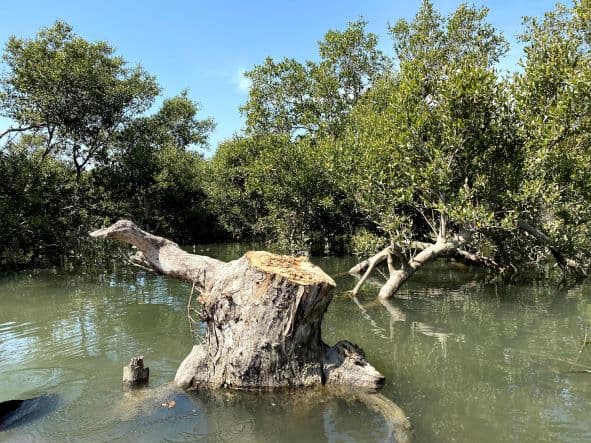 Jan Muhammad Mallah, a fisherman, is standing on seashore in the scorching summer heat, trying to push his boat into the sea. When he gets tired of pushing, he asks another fisherman standing nearby to check the water level with his bamboo stick so that he can find out why his boat is not moving.

A resident of Rehri Goth, a slum of about 400 houses on the southeastern coast of Karachi, he is only 40 years old but his beard and hair have already turned grey from working in the sun and the open sea. Before going to the sea on the afternoon of March 18th, 2022, as per his usual routine, he says his family has been fishing in the area for four centuries. But over the past few years, he says, not only has it become harder for him to travel deeper into the sea but the quantity of fish in the ocean has also dwindled. In the past, he says, he used to catch 30 kilogram to 40 kilogram of fish in a single trip but now he cannot catch more than 5 kilogram to 10 kilogram of it.

The main reason for these problems is the rapidly spreading pollution on Karachi’s coast, Mallah says. "It is getting difficult by the day to continue fishing here because the part of the sea around our village has become very polluted," he complains.

One of the major factors responsible for this situation is the presence of large industrial and commercial establishments within a radius of five kilometres from Rehri Goth, he says. These include Port Qasim, two LNG terminals set up for the storage and transportation of natural gas and 600 megawatt coal-fired Lucky Electric Power Plant. The constant movement of ships at the port has a twofold impact on local fishermen, he says. “Firstly, it restricts our access to the sea; secondly, the loading and unloading of goods from the ships litters the coast.” 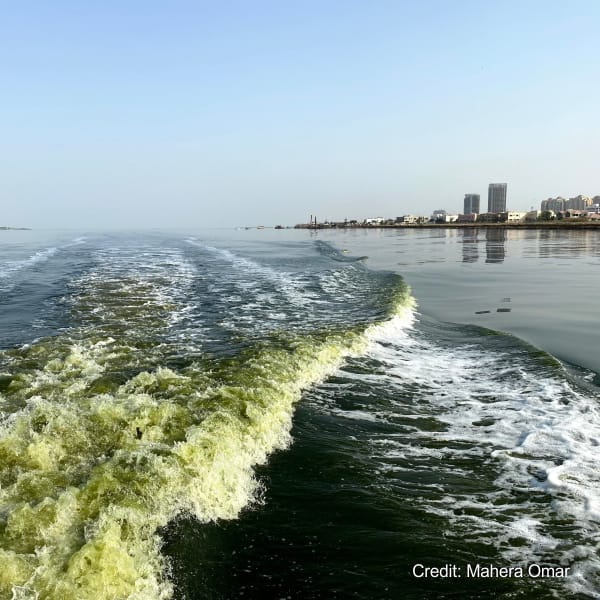 Seawater has become highly polluted due to industrial activities

As a result of this pollution, Arabian Sea waters that bound Rehri Goth on three sides have not only turned black over several kilometres but the mixture of oil, coal and wastewater flowing from nearby settlements into the sea has also created a very foul smell. This explains why mosquitoes, flies and other insects are abundant in this whole area, says Mallah. The inhabitants of Rehri Goth blame them for malaria, respiratory problems and gastrointestinal diseases being rampant among them.

Mahera Omar, a filmmaker who works on the conservation of mangrove forests and the wild and aquatic life found around Karachi, confirms the presence of all these problems. Over the last two decades, she says, industrial and commercial activities have "severely affected the natural environment around Port Qasim."

A clear example of these effects, according to her, is the continuous decline in the expanse of ​​mangrove forests found in the area. Human activities around the coast have accelerated deforestation here, she says. This, in turn, is resulting in the extinction of wildlife and aquatic life along the sea, she says. 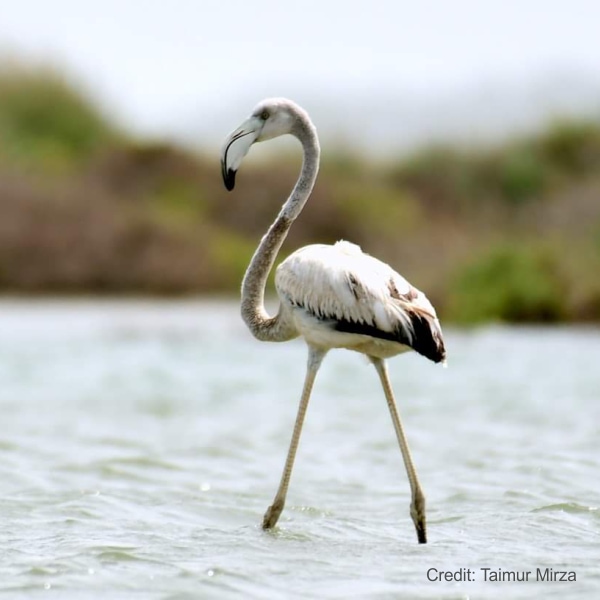 Local residents, however, complain that, instead of solving these problems, the government is planning to increase them. In this regard, they specifically mention the proposed construction of a third LNG terminal, just two kilometres away from Rehri Goth. They say this terminal is being built by a Japanese company, Mitsubishi, which has also set up a Pakistani subsidiary, Tabeer Energy Limited.

The purpose of building this terminal is to store liquefied natural gas (LNG) imported from Qatar in ships and then convert it back into gas to transport to different parts of Pakistan through pipelines. Planning for the project started in 2018 but it only exists on paper so far. Yet, the fishermen of Rehri Goth fear that once it is built, not only the natural environment of the sea will deteriorate but their financial situation will also become worse. They believe the construction of the terminal will  "further block their access to the sea" and "reduce the amount of fish" available to them.

On January 21st, 2022, Alliance for Climate Justice and Clean Energy (ACJCE), a coalition of five non-governmental organisations and research institutes, wrote a detailed letter to Mitsubishi. In this letter, it raised serious questions about the environmental and social impacts of the proposed terminal. It asked the company to review the project and address all its negative aspects properly before making a final decision about its construction.

The letter has been endorsed by about 30 civil society organisations, research institutes and prominent people from various fields of life. It says the terminal is being built on the confluence of Chhan Wado and Chara creeks which house large mangrove forests. These forests not only provide a safe breeding ground for fish but they also play an important role in the growth and protection of seaweed and coral reefs.

These mangrove forests also act as a natural barrier against sea storms, says Omar. Mangrove trees "act as a wall against strong sea winds and protect the coast’s environment and the people living there from marine disasters," she says. 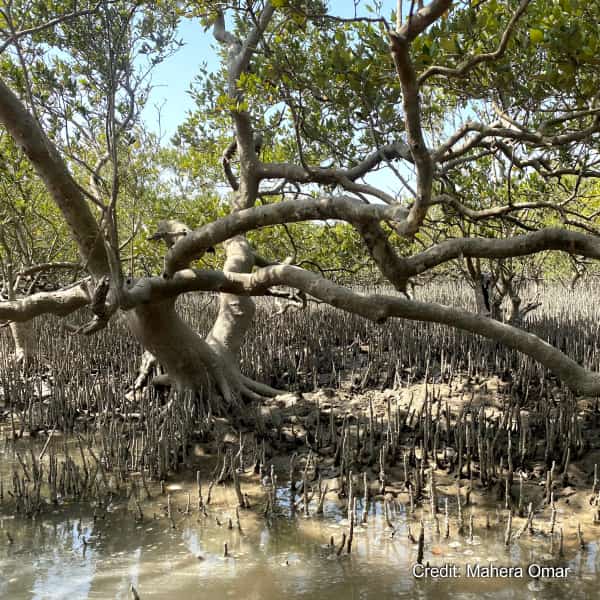 Ecologists point out that the importance of these forests can be gauged from the fact that they are found on only 0.5 per cent of the world's coasts but they absorb 10 per cent to 15 per cent of the total carbon produced there.

Tabeer Energy Limited, on the other hand, says in a document provided to the government that the terminal’s construction will not have a major negative impact on these forests. It claims that only about 23 acres out of 75,000 acres of mangroves spread along the Arabian Sea coast will be affected by the project. It also claims that it will compensate this loss by spending 5.72 million dollars on the planting of mangroves at an alternate location.

ACJCE, however, says that Tabeer Energy Limited is underestimating the potential damage to mangrove forests. Citing local concerns, the alliance writes in its letter that the actual forest area that would be impacted by the terminal is at least twice the size shown in that document.

ACJCE also says that Tabeer Energy Limited has similarly misrepresented the social impact of the terminal. In a report it has provided to the government, it says there is no human population in ​​10 kilometre radius from the terminal when, in fact, two fishing villages, Rehri Goth and Lath Basti, are located less than five kilometres away from the proposed location of the terminal.

Citing a number of social and environmental issues, the letter says the main reason behind them is the fact that the planning for the terminal has been done mostly behind closed doors. Both Tabeer Energy Limited and the government have neither consulted the local population properly nor have they fully understood the importance of mangrove forests and the negative impact they will suffer, it says.

"These forests have a unique and diverse ecosystem that is maintained by interconnected creeks within the Port Qasim area," says Omar, confirming the second problem. “All the insects, plants and organisms found here are linked to each other in a complex way. In winter, for example, flocks of pelicans and pink flamingos eat insects breeding in the sea mud in these creeks”, she says. 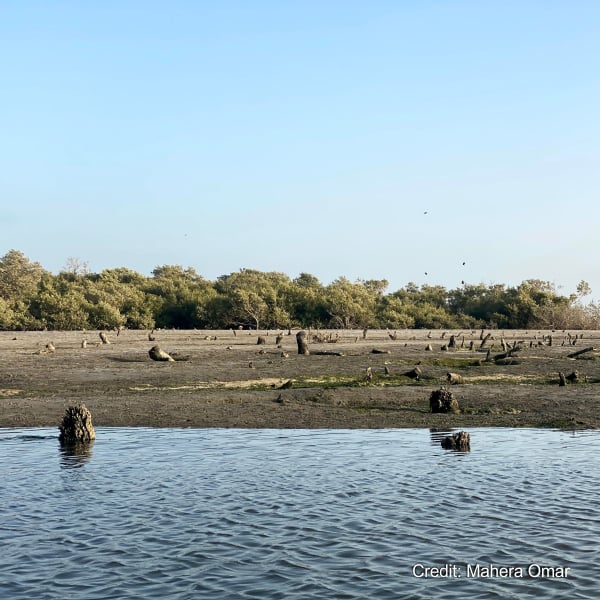 The deforestation of mangroves will severely affect the entire ecosystem

Deforestation will adversely affect this entire ecosystem and this damage will not be undone by planting mangrove trees elsewhere, she says. The alliance also points out in its letter that the terminal’s construction will drive the fish to deeper waters, forcing the fishermen of Rehri Goth to go on longer sea voyages to catch them.

Sindh forest department issued a notification on May 7th, 1966 to declare all the mangrove forests in Karachi district as protected. Without the prior permission of the department, the notification stated, no human activity can be carried out  which could cause harm to these forests.

A report on the environmental impact of the proposed terminal submitted to the government by Tabeer Energy Limited, though, states that the notification does not apply to its construction site. This is because the site is part of an area that was leased to the Port Qasim Authority a few decades ago by the forest department, it states.

Karachi district forest officer Shehzad Sadiq disagrees. He says the notification still applies to all the lands leased to Port Qasim Authority. It is, therefore, still necessary for Tabeer Energy Limited to get permission from his department before building the terminal, he says.

Mitsubishi, meanwhile, says in a reply to ACJCE letter that the proposed terminal is being constructed by following all the provisions of various LNG related policies effective in Pakistan since 2011. In this regard, it claims all relevant Pakistani and international laws, regulations and standards are being strictly enforced. It also says it has submitted to the government a report based on the terminal’s environmental impact analysis after multiple reviews, visits to the construction site and public hearings. It is on the basis of this report that it has been awarded a No Objection Certificate (NOC) for working on the project, it argues. 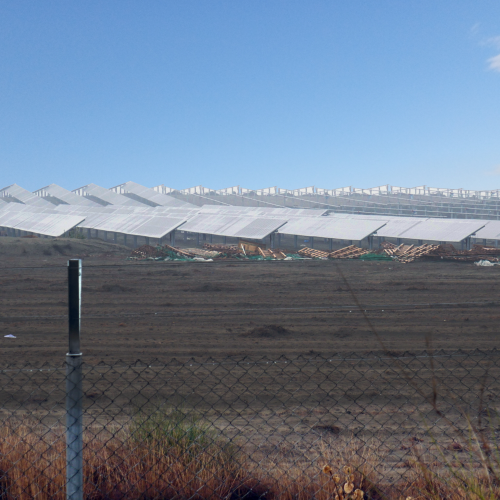 Mitsubishi also says in the reply that it has “voluntarily” started the process of seeking the approval of Sindh forest department and the provincial fisheries department for the construction of the termina. (But Shehzad Sadiq says the forest department has not received any application in this regard.)

Mitsubishi’s most important claim, though, is that it is still reviewing the technical, commercial and regulatory aspects of the terminal and has not made any final decision to invest in it. "No construction work on the project will be started before that decision is made and no mangrove trees will be cut down till then," it says.

But fishermen from Rehri Goth question this claim. They ask as to why their access to the sea has been blocked and why mangrove trees have been cut down in a 12 kilometre area around the LNG zone of Port Qasim Authority if the final decision has not been made yet. On the contrary, they contend, the reason for these measures is that the implementation of this project is already in full swing.

Their assertion is indirectly confirmed by a notification issued on July 27th, 2018 by the provincial department of fisheries. It says that Tabeer Energy Limited and the World Wide Fund for Nature (WWF), an international organisation working on environmental protection, have entered into an agreement under which the two organisations will work together to improve the social and economic conditions of fishermen living around Port Qasim.They will take these joint steps so that the negative effects of the proposed LNG terminal could be mitigated.