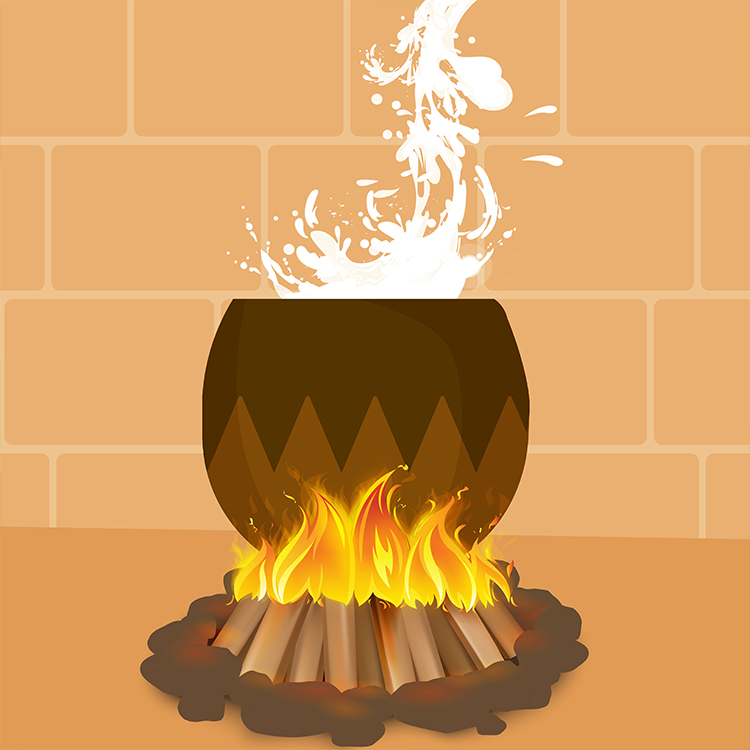 A recent study has revealed that the inhabitants of the ancient Indus Valley Civilization were not only carnivores but also experts in processing milk.

Researchers have found evidence for this in 59 samples of ancient pottery recovered from the remains of the Indus Valley Civilization in the Indian state of Gujarat. Analysis of the absorbed fat in these clay pots has revealed that not only animal meat was cooked in them but they were also used for processing dairy products.

These findings have been reported in a study published in the September 2020 issue of a well-known scientific journal, ‘Nature’. The study was conducted by Kalyan Sekhar Chakraborty and Heather Miller of the University of Toronto, Canada, Greg Slater of McMaster University, Professor Prabodh Sherwalkar of the Deccan College and Research Institute of India and Yedubar Singh Rawat of the Gujarat State Directorate of Archeology.

Significant remains of the Indus Valley Civilization are found in Harappa (Punjab) and Mohenjo Daro (Sindh) in Pakistan and Dolavira, Bhadali, Lothal (Gujarat), Kali Bhangan (Rajasthan), Rakhi Garhi (Haryana) and Roopnagar (Punjab) in India which are about eight thousand years old. Considering the current map of the subcontinent, this civilization was once spread over almost the whole of Pakistan as well as eastern Afghanistan and northern India.

It was a developed civilization with a focus on agriculture, urban planning, trade, pottery and sculpture and had commercial relations with countries in the Middle East and Central Asia. About three and a half thousand years ago, its habitats became desolate due to changes in climatic conditions, its agricultural system was destroyed and its commerce was ruined. And, thus, an entire civilization came to a gradual end. 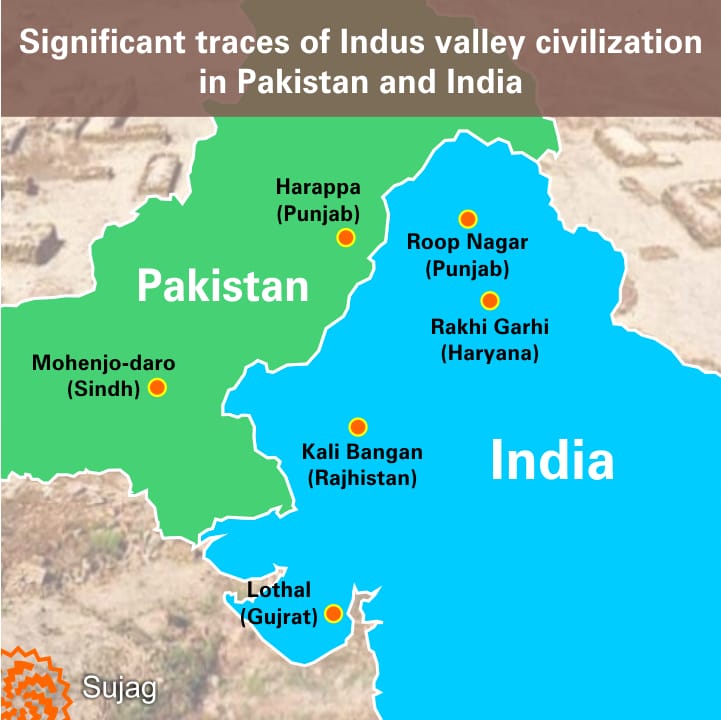 Contrary to the popular belief, the study published in ‘Nature’ claims that animals were not only used for riding or farming in the Indus Valley Civilization but also for food and milk. In other words, it refutes the notion that the inhabitants of the Indus Valley Civilization were vegetarians and did not eat meat, especially of cows and buffaloes.

The publication of this research has also led to reports, especially in the Indian news media, which claim that the people of the Indus Valley/Harappan Civilization were experts in making cheese. These reports proudly cite the study to have proved that the inhabitants of India knew the art of making cheese long before the West did.

Chakraborty, one of the authors of the study, acknowledges to have found “that dairy played a major role in the daily diet” of the residents of the Indus Valley Civilization but he also says that it is difficult to claim with certainty that they made cheese, butter, ghee or curd from milk. In an email to Sujag, he explains that the “lipid residues in cooking vessels” found from the ruins in Gujarat indicate that milk was heated in them.

This could just mean that the inhabitants of that civilization would heat milk before they consumed it, he says. This residue, thus, can only prove that the inhabitants of the Indus Valley/Harappan Civilization “were processing dairy beyond the consumption of raw milk”.
He also says it is possible that they prepared a dish in which millets, barley or wheat were boiled along with milk “but it is difficult to say what the end product was”.

The study also reveals that the inhabitants of the Indus Valley/Harappan Civilization were processing and consuming dairy that came from cows and buffalos and not from sheep or goat -- at least in Gujarat. As Chakraborty says: “Goats were primarily used for their meat”.

The method used by Chakraborty and his fellow researchers is called “leftover fat analysis”. In this method, pottery found at an archeological site is cleaned and ground and the fat contained in it is extracted from the clay by a special solution. This fat is then scientifically tested to find out as to which animal’s meat or milk has been used in the pot and whether that animal was herbivore or carnivore.

The pots the researchers have analyzed in this study might have been used for cooking meat of grass-eating animals. This is because some of the pots contain the fat of animals whose diet includes grass, millet, sugarcane, corn and vegetables. Obviously, only cows, buffaloes and sheep consume this type of fodder.

The bones of animals found in various artifacts of Indus Valley civilization also suggest that those were sheep, goats, cows, buffaloes and deer. Tool marks found on those bones indicate that those tools were used for cutting, making and eating meat. 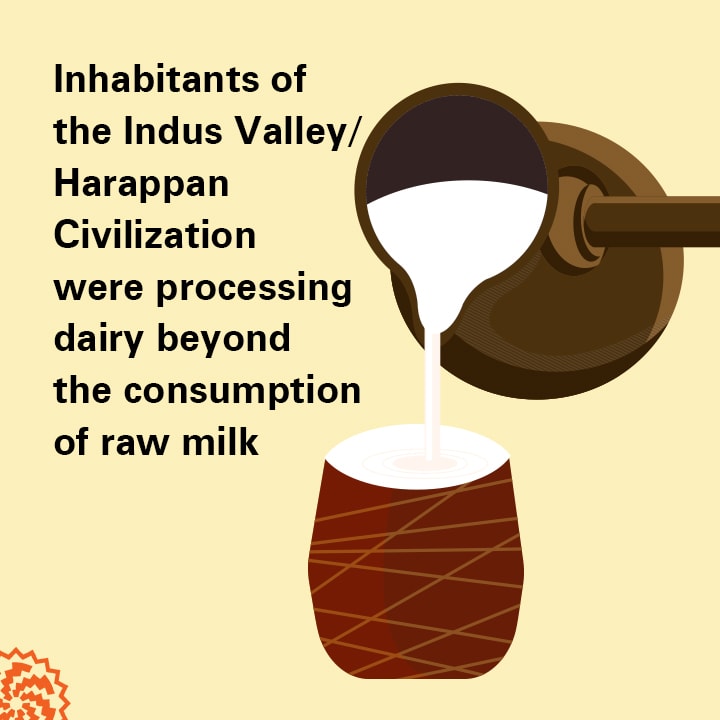 These bones also make it clear that cows and buffaloes were found in large numbers during that period because 50 to 60 per cent of those bones belong to these two animals. Only 10 per cent of them are of sheep and goats. This suggests that the favorite meat of the inhabitants of that civilization must have been beef – as well as some mutton.

Analysis of fat in the pots has also revealed that the inhabitants of the Indus Valley Civilization ate cooked or fried meat. Similarly, the analysis of bones and teeth of most sheep and goats shows that they died at a young age, suggesting that they were raised for meat.

The use of cattle as a primary source of food (as meat) and a secondary source (as milk) has always been of interest to archaeologists. In the case of the Indus Valley Civilization, it has already been proven that its residents were raising cattle in 7000 BC. The study published in ‘Nature’, however, has revealed something additional: which animals were raised in that civilization and for what purpose.

Archaeologist and founding director of the museum, archives and library department at the State Bank of Pakistan, Dr Asma Ibrahim believes that this revelation may require further corroboration. She says the sources of diet in the Indus Valley Civilization have earlier been proven to be different grains but the latest research opens up new possibilities. But she points out that no research has been done on Harappa, Mohenjo-daro or other remains of the Indus Valley Civilization in Pakistan to confirm or deny the discoveries made in India. 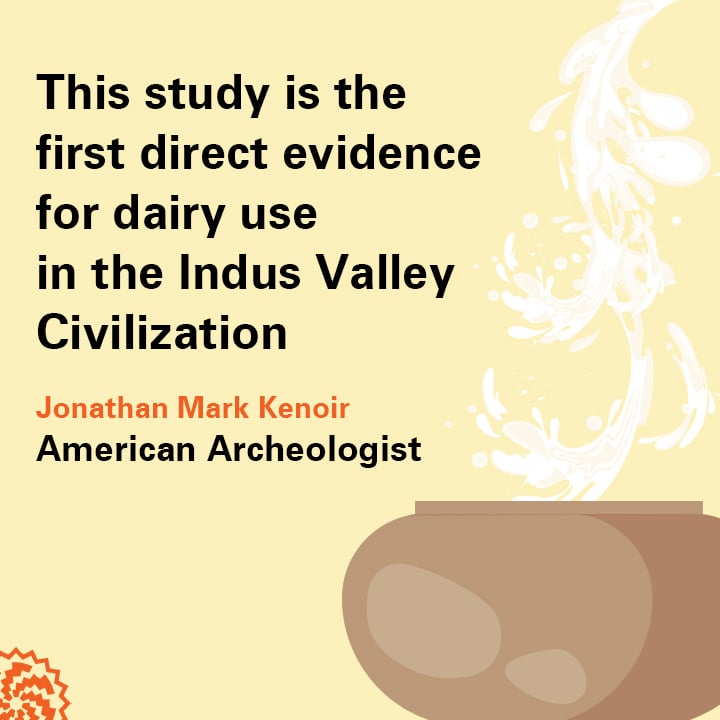 She, therefore, suggests that we will have to wait for the results of more such investigations at other places – especially in Pakistan -- before we can say with 100 per cent certainty as to what kind of diet those people had.

She, therefore, suggests that we will have to wait for the results of more such investigations at other places – especially in Pakistan -- before we can say with 100 per cent certainty as to what kind of diet those people had.

American archaeologist Jonathan Mark Kenoir, who works at the University of Wisconsin and is also a well-known researcher on the Indus Valley Civilization, on the other hand, considers the results of the study published in 'Nature' to be a unique discovery. In an email to Sujag, he says that there have been “numerous suggestions of dairy consumption during the Indus Civilization… based on the mortality pattern of the animals as well as… artefactual remains that may represent probable consumption of dairy products.”

This, according to him, means that “we have known for a long time that the Indus Valley Civilization relied on dairy. This study, however, “is the first direct evidence for dairy use” and offers an “additional source of data regarding its consumption”.

Citing an analysis done on 20 teeth of cows and buffaloes in this study, he explains that they died of old age. “This could lead to the conclusion that the purpose of raising them…may have been to get milk from them.”

This report was first published by Lok Sujag on 17 Jun 2021, on its old website.