Brick by brick: The deadly contribution of emissions from kilns in Punjab to winter smog
English
English 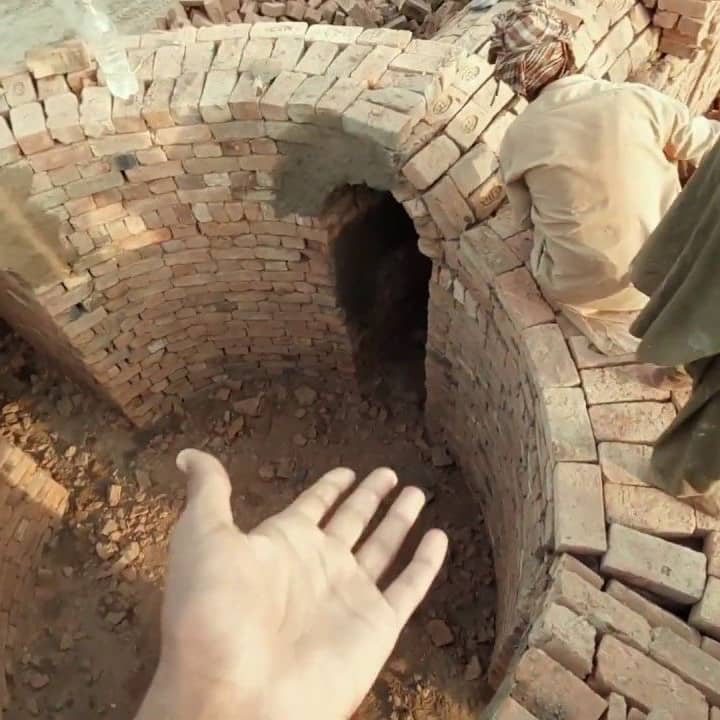 Work at Mian Farman Ali's kiln is in full swing. Workers are making raw bricks in a wide field around it; inside the kiln, some workers are placing raw bricks on top of each other in a particular order on the one side while, on the other, another group of labourers is loading baked bricks on wheelbarrows and taking them out of the kiln. Ringlets of white smoke emanating from the kiln’s chimney can be seen dissolving in the air.

The color of the smoke it emits is not the only distinguishing feature of this kiln but its structure and the method of placing bricks inside it are also different from the black smoke-emitting kilns. Instead of being placed upon each other like a thick wall, as is done in other kilns, the bricks in it are laid in a zigzag way so that hot air can pass through them easily. The way bricks are arranged in other kilns requires more heat to bake them because there are no spaces between them for the air to pass through. Furthermore, in the absence of air in these kilns, coal used in them as fuel is not completely burned and, thus, produces toxic fumes.

The new method used in Mian Farman Ali's kiln, which is located in a village on the outskirts of Faisalabad, is called zigzag technology. It is basically a structure built inside a kiln that minimizes the amount of toxic and hazardous gases and other dangerous elements released from coal. In kilns running on this method, the heat generated by the fire is passed through the bricks with a large electric fan so that all the bricks get the same amount of heat. The presence of air inside the kiln also makes the process of coal burning more efficient so, resultantly, most of the carbon in the coal is burnt within the kiln. The smoke emitting from such kilns, therefore, is white and relatively less toxic than the one emitted by other kilns.

The reason for the introduction of this method in Pakistani kilns is the increasing air and environmental pollution, especially in Punjab, over the last few years and the smog that engulfs Pakistan’s plains in early winter. Kilns are reported to be a major contributor to this smog. It is because of this contribution that the Lahore High Court has directed the Punjab Environment Department to close down all the polluting kilns starting from November 7, 2020. Similarly, all the kiln owners in Punjab have been directed by the provincial government to transfer their kilns to zigzag technology by December 31, 2020. Otherwise their kilns will be shut down.

Many traditional kilns are working secretly to avoid this ban. 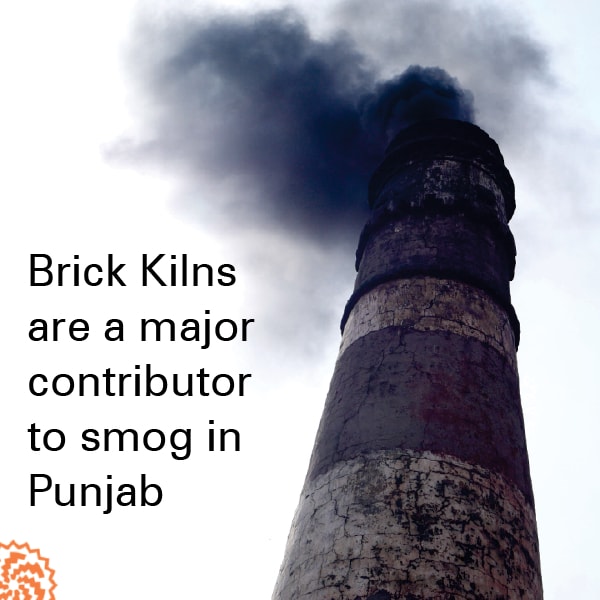 One such kiln is operating a few kilometres from Roshanwala, a village on the outskirts of Faisalabad. No hustle and bustle is visible around it. No workers can be seen making raw bricks, nor are raw bricks being installed inside the kiln. Yet, the black smoke rising from its chimney shows that it is still operating on the old technology.

Talking to Sujag, the owner of the kiln, Mian Basharat Ali, says he has stopped making raw bricks. Only the bricks already placed inside the kiln are going through different stages of baking, he says. He, however, complains that “the government and the courts are urging kiln owners to switch to zigzag technology but they are not offering us any help us in this regard.”

He also says that skilled craftsmen are not readily available to install and operate zigzag technology in kilns and that the government has not, as it had promised, built model kilns to make kiln owners conversant with the new technology. “That is why they are left to experiment on their own which is causing loss to most of them.”

Basharat also points out that zigzag technology is not entirely flawless. According to him, one of the major flaws in it is that the fans used for blowing hot air into bricks develop faults soon after they are installed. The faulty fans stops heat from reaching the bricks evenly and a large number of them remain half-baked. “This causes kiln owners a loss of millions of rupees,” he says.

Mian Farman Ali does not agree with Basharat Ali. It has been more than two years since he moved his kiln to zigzag technology and he has not encountered any major problem. Explaining its benefits, he says: “The quantity of coal used in my kiln is 30 per cent less than what traditional kilns are using. I used to make about 30,000 bricks in 24 hours but now my kiln is making 60,000 bricks a day which are also of better quality than that of others.”

To avoid financial loss in installing zigzag technology, he advises kiln owners not to transfer their kiln to it before learning the technology well--as many people have already done only to fail.

As far as the government deadline to close down the kilns is concerned, Mian Farman Ali says most of the kiln owners are of the view that it is impossible to transfer all the kilns to zigzag technology by December 31, 2020 as it costs a lot of money to build a kiln using this technology. This huge investment causes financial problems for kiln owners, he says, whereas the old technology can be run with much smaller money. 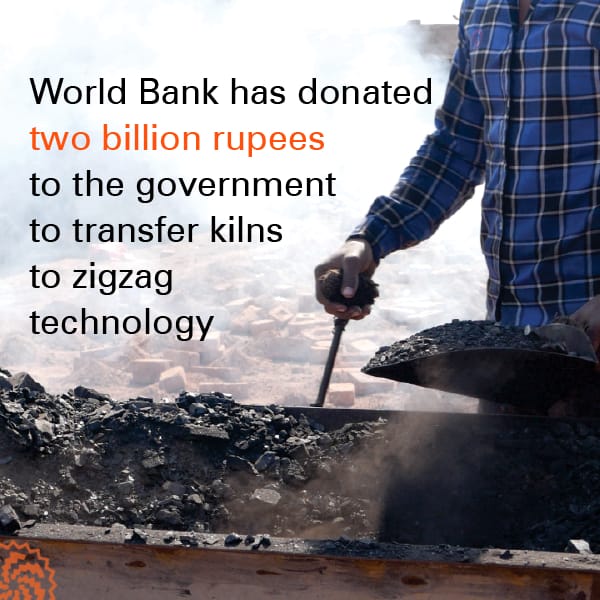 Regarding these costs, Mohammad Noman Younis, assistant director of the Environment Department in Kasur, says, “It costs an average of six hundred thousand to seven hundred thousand rupees to transfer a kiln to zigzag technology but kiln owners earn millions of rupees over the year so their claim that they do not have the money for zigzag technology is just an excuse.”

Kiln owners, however, are not the only ones worried about the deadline. Kiln workers are also unhappy about the government's order to close down the kilns. Muhammad Shabbir, provincial secretary general of the All Pakistan Kiln Workers Union, says the workers, who are already earning very low wages and operating in unsuitable and unsafe conditions, will be forced to starve if kilns in Punjab are shut down after December 31.

Talking to Sujag, he says, “In case the kiln industry shuts down, Prime Minister Imran Khan should register kiln workers in the Ehsas program, the federal government funded social security program, so that these workers can feed their children.”

One step forward, two steps back

In 2017, a meeting of the representatives of the International Center for Integrated Mountain Development (ICIMOD), an international organization working on environmental protection, the government of Pakistan and kiln owners was held in Islamabad. In this meeting, kiln owners were shown videos about zigzag technology. In the same year, kiln owners and government officials visited Nepal where they observed kilns running on that technology.

Mehr Abdul Haq, general secretary of the All Pakistan Kiln Owners Association, and other officials of his organization held seminars in Lahore, Islamabad, Multan and Faisalabad on their return from Nepal and shared their experiences with other kiln owners in these seminars. They not only introduced zigzag technology to the owners but also promised them that the government would provide them cheap loans to help them change the structure of their kilns and install electric fans in them. Three years later, Mehr Abdul Haq is not happy with how the government has handled the issue. 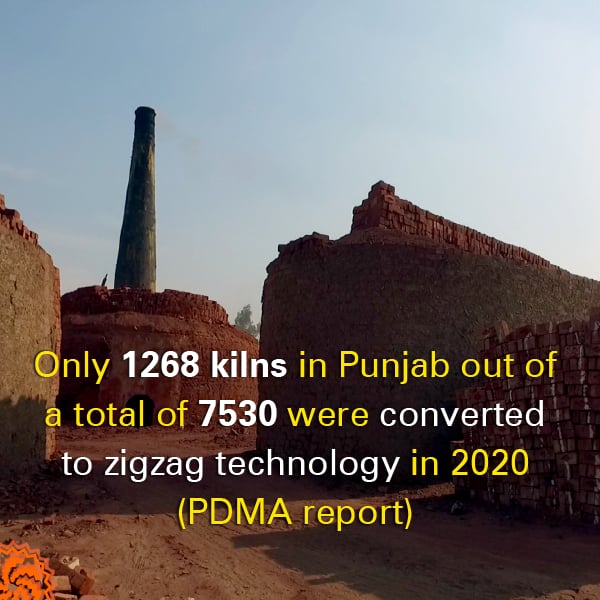 He claims the World Bank had provided two billion rupees to the government of Pakistan under the Green Development Program in 2017 which were to be disbursed as loans to kiln owners on easy terms so that they could transfer their kilns to zigzag technology. Even though three years have passed since the receipt of money by the government, he says, not a single rupee has been given to kiln owners.

Muhammad Noman Younis, assistant director of the Environment Department in Kasur, acknowledges that the World Bank had donated two billion rupees to the government to transfer kilns to zigzag technology. But, he says, the government has not yet made any policy regarding this money and is not given it to anyone.

Environment department officials stationed in different parts of central Punjab claim that kiln owners are not adopting the new technology just out of fear. Muhammad Arif Mahmood, assistant director of the Environment Department in Faisalabad, tells Sujag: “Whenever a new technology comes along, people are reluctant to adopt it at first” but he also claims that the owners of kilns are “embracing this technology by and by.”

But, according to a report prepared by the Provincial Disaster Management Authority (PDMA) and released on November 14, 2020, the speed of this adaptation is not really great. Only 1268 kilns in Punjab out of a total of 7530 have been converted to zigzag technology so far, the report said. In other words, less than 20 per cent of the total kilns in the province are using the new technology.

This report was first published by Lok Sujag on 23 Nov 2020, on its old website.