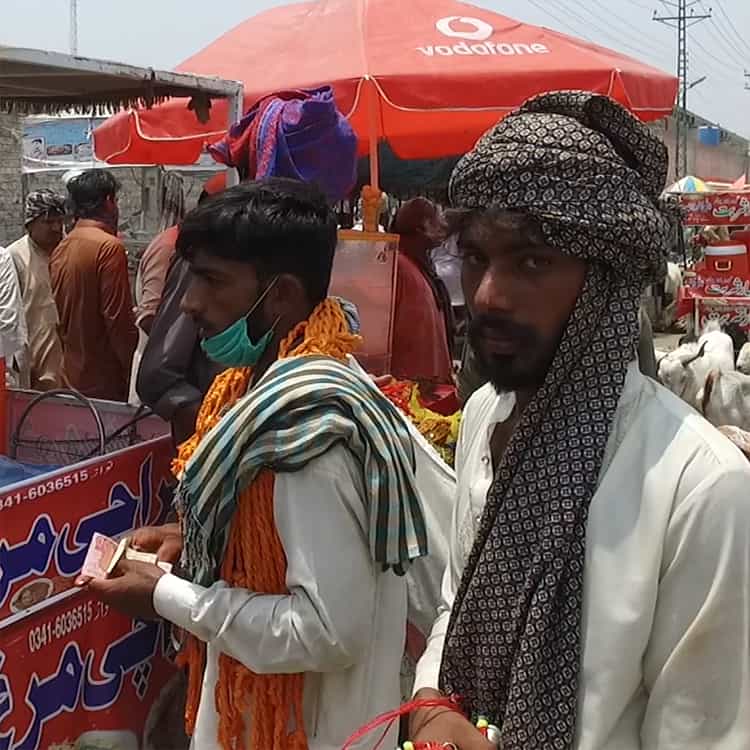 Atif Iqbal works at the Lahore office of a mobile phone company. A few weeks ago, he experienced exhaustion, headache and cough but he ignored these as symptoms of the seasonal flu. He also thought a Panadol tablet could effectively cure these symptoms. It did not.

Instead, not only his headache worsened, his cough also became more frequent and intense and he felt his chest was becoming congested. When he informed his office about his illness, one of his colleagues advised him to get tested for Covid-19.

Iqbal thought that coronavirus had disappeared from Pakistan so he did not take the advice seriously. “But then my mother also developed the same symptoms as I had,” he says. So, he decided to get both himself and his mother tested. After the result of the tests came positive, the two quarantined themselves at home for fourteen days and started getting treatment for the virus.

Iqbal believes he contracted the disease from his office where a lot of people visit every day without following any standard operating procedures (SOPs) necessary to avoid the spread of the virus – such as wearing face masks and avoiding physical contact with other.

“When coronavirus first started spreading in Pakistan in March-April this year, everyone panicked so, even before the government imposed a lockdown, our company strictly advised all its employees and clients to follow the SOPs,” he says. That saved him and his colleagues from the first wave of the virus.

Everyone, however, became careless about these SOPs from late July onwards when the first wave of coronavirus started to ebb. “I realized the severity of the second wave of the virus only after becoming infected with it,” says Iqbal. Ali Imran experienced a similar situation. He works with a television channel in Lahore. A few weeks ago, he travelled to Multan, a city more than 350 kilometers to the south of Lahore, where his family lives. When he was there, his father complained of fever and cough. His physical symptoms were the same as those of Covid-19. A test later confirmed that he was infected by the virus.

Soon afterwards, seven member of Imran’s family -- including his mother, sister, brother and sister-in-law – also contracted the virus. Iman attributes this to a general carefree attitude towards Covid-19. “People are no longer as concerned about the severity of the pandemic as they were in its earlier phase,” he says.

Covid-19 is raging again in Pakistan. The number of both new infections and deaths from it has increased alarmingly over the last month or so. On November 27th alone, 3045 new virus cases and 45 deaths related to it were reported from different parts of the country. In this outgoing week as a whole, 20,848 new cases of Covid-19 have been recorded in Pakistan. Meanwhile, the daily percentage of positive cases – obtained through a comparison of the tests being conducted in a day and the people found infected by the virus in those tests – has gone above 6 percent. This is the highest positive percentage in the last three months.

The data released by the government also shows that Covid-19 caused as many as 280 deaths in the last week. In percentage terms, this is only slightly less than the deaths per week reported in June-July 2020 when the virus infections were at their peak and two of the every hundred infected people were dying.

The government, therefore, has announced officially that Pakistan is in the grip of the second wave of the virus. Dr Faisal Sultan, special assistant to prime minister on health, has warned that the virus can spread rapidly if comprehensive precautions are not taken immediately.

Already the total number of Covid-19 cases in Pakistan has risen to 392,356 (of which 337,553 have recovered). The number of total deaths from the virus, meanwhile, has reached nearly eight thousand -- 7,942 to be exact as of November 27th.

The first wave of the virus had hit the country on February 26th, 2020 when its first patient – a returnee from a pilgrimage in Iran -- surfaced in Karachi. That wave reached its peak in June this year when on average 6,000 corona cases and 100 deaths would be reported from across Pakistan on a daily basis. After the middle of July, the number of new verified virus infections started decreasing. By September, the number of verified cases dropped to almost nil so the government decided to reopen educational institutions which had been closed down six months earlier.

At the early stage of the Covid-19 pandemic, scientists warned the governments and general public across the world about its possible second wave. They would tell everyone that a decline in new virus infections did not mean that the pandemic was dissipating. As is the case with many other pandemics, they said, the second wave of Covid-19 was inevitable and could possibly be more dangerous than the first.

As many countries began to reopen businesses and resumed social activities in the summer of 2020, these warnings became self-fulfilling prophecies. People cloistered indoors for several weeks were also too eager to get out and go about their routine activities.

The number of people infected with Covid-19, however, was still high in many regions. The transmission of the virus, therefore, was easily re-triggered as soon as people lowered their guard and increased local and foreign travel as well as restarted physical contact with each other.

In Pakistan’s case, a large number of new infections have been reported from educational institutions so medical experts and even students and teachers have been asking the government for weeks to shut them down.

A report prepared by the provincial government of Punjab only confirmed these reports. It revealed that that 1,004 schoolchildren in the province had tested positive for the virus in the two month period between September 15th of November 15th -- a higher number than the one recorded during the first wave of the pandemic.

Health experts believe that both the government and people are still not taking the second wave seriously. Political rallies – organized both by the government and its allies and the opposition parties – and religious congregations such as Friday prayers and Sunday masses still continue to take place even though the head of an opposition party has tested positive as have seven members of a Pakistan cricket team visiting New Zealand.

In the middle of the current month, to cite just one big example of this general indiscretion, both the government and the opposition parties canvassed for an election in Gilgit-Baltistan region, holding mass gatherings and doing door-to-door campaigning. On November 19, a crowd numbering several hundred thousand attended the funeral of a religious-political leader in Lahore. Four days later, the opposition parties held a big gathering in the city of Peshawar, receiving a lot of flak from the government for violating the coronavirus-related SOPs.
Winter being the wedding season in Pakistan, thousands of wedding ceremonies are taking place in the country every day. This is similarly giving health experts a serious cause for concern.

Although last week the government imposed a ban on indoor weddings and restricted the number of guests who can attend a wedding event in the outdoors, it is likely that many wedding events will continue to take place behind closed doors and, thus, become a conduit for the spread of the virus.

Dr Ahmad Ammad, a general physician working at Lahore’s largest public healthcare facility, Mayo Hospital, confirms these apprehensions when he says that “large gatherings are making the virus transmission easier.” Lamenting that Pakistanis are behaving as if the virus does not exist, he adds: “They believe that Pakistan has achieved ‘herd’ immunity against the virus which, of course, is not the case.”

Dr Ahmad Ammad also warns that the second wave of the virus could also infect those who have already once suffered from it during the first wave. “If such a person catches the virus, the chances of his survival are very low,” he says. “That is why this second wave could be more lethal than the first.”

Another major reasons why the ongoing wave of the virus could spread faster than the first one is that cold weather and high humidity are favorable conditions for the spread of diseases like Covid-19, says Dr Ehsan ul Hassan who works at Jinnah Hospital, a public sector healthcare facility in Lahore. “So, we can say that the second wave could be far more widespread as compared to the first,” he says.

Dr Ehsan ul Hassan says the number of new Covid-19 patients arriving at his hospital is as high as it was in April 2020. He, however, points out that the government then took comprehensive steps to ensure that the patients were properly quarantined and treated in isolated wards. “These precautions are not being taken today as assiduously as they were before,” he says.

He points out how in March 2020, when the number of Covid-19 patients started rising first, the government established corona centers in various cities which were equipped with testing machines and quarantine facilities. “The government then also set up special corona wards in many public and private hospitals,” he says.

When, however, the first wave of the pandemic was seemingly over, all these special facilities were rolled back. “Now we are facing another attack of the virus without any of these preparations,” says Dr Ehsan ul Hassan.

He is also critical of the way the government is handling information related to Covid-19. “The federal ministry of national health services is the only source of information about the current situation of the virus in the country so we have no other source to counter-check the data released by it,” he says.

He is similarly concerned about the limited corona testing that Pakistan is doing. This, he says, may mean that many more are infected by the virus than what the official numbers suggest.

Dr Alia Haider, who comes from Balochistan province but was working as a frontline health practitioner in Lahore during the first wave of the pandemic, has the same concern. According to her, the limited testing might be leading to under-reporting of the virus infections. “It is possible that a large number of people have contracted the virus but we cannot identify them because we are not doing enough testing,” she says and adds that Pakistan needs to test at least one million people every day. “We cannot formulate a proper Covid-19 policy without that kind of testing,” she points out.

On the contrary, as per the government’s own data, merely 40,369 tests were conducted in all parts of the country on November 28th.

This report was first published by Lok Sujag on 29 Nov 2020, on its old website.