Surviving ‘cyber-attack’: How patwaris have maintained their supremacy in the face of land record's digitisation in Punjab
English
English 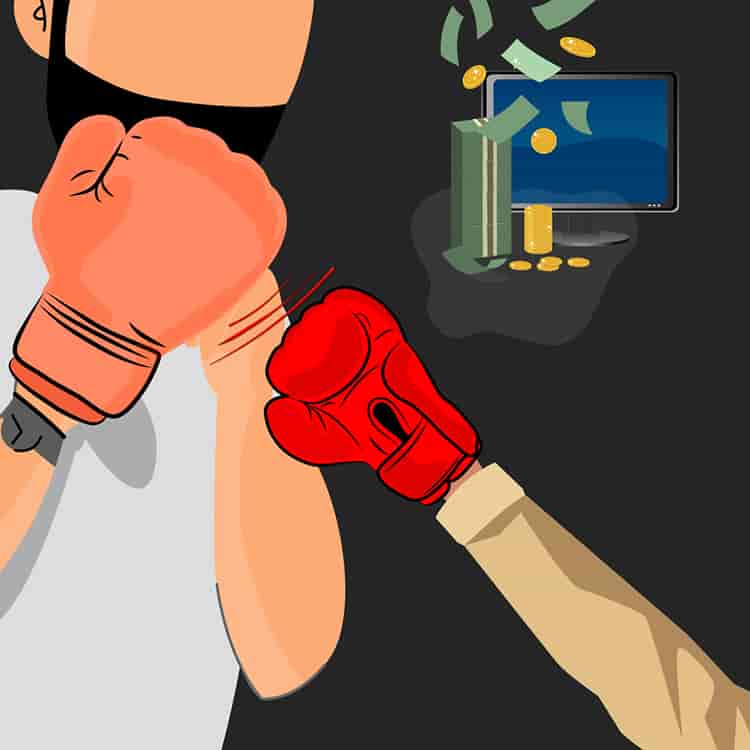 Surviving ‘cyber-attack’: How patwaris have maintained their supremacy in the face of land record's digitisation in Punjab

Surviving ‘cyber-attack’: How patwaris have maintained their supremacy in the face of land record's digitisation in Punjab

Asif Ali, 55, lives in Bukanwal, a village located at the bank of River Ravi. He has been a farmer all his life, just like his ancestors. His village falls in the area that has recently been marked by the Ravi Urban Development Authority for building a new city and is fast becoming a fertile ground for land disputes and legal battles.

What is keeping Asif up at nights is also a legal matter but a unique one as it owes its origin in the Punjab government’s ambitious plan to digitize land records.

Asif owns a small piece of agricultural land - around ten kanals - that he had inherited in early 1990s. A year and a half ago, he went to an Arazi Record Center to get a copy of fard (ownership certificate) of his land from the Center’s computerized records. He was shocked to learn that the records show that his ancestral land was instead owned by some Rehmat Ali.

Asif has all the documents including previous jama-bandis (periodical land record published every four years) to prove himself as the owner besides the supporting fact that no one else has ever contested his ownership. The Arazi Record Center, however, refused to issue him the required document.

He went back to knock at the door of ‘bad old’ patwari and there he found out that his name had been miswritten in the manual records which were then digitized as such. He was told that to get it rectified, he had to first request the patwari to correct the manual record which then had to be approved by a long chain of officers before the Center could update its digitized record and issue him the required document.

“I have been to every single office I was referred to, patwaris, tehsildars, district commissioner, land record centers, you name it.” He claims that had to grease palms at many offices, “but all I got in turn was false promises.”

A year and half later, Asif has all the documentary evidences of his ownership of the ten-kanal land, yet the official records still show it in the name of Rehmat Ali.

Digital ambition and the politics ‘coded’ inside it

If Asif had faced the same problem a decade or two ago when land records were being maintained manually, he would only have to go the patwari and find a way to get him to fix it.

The government of Punjab, however, decided to change the system in 2007 and signed a dollar 115 million project with the World Bank to digitize land records in the entire province and make these accessible to the public. The responsibility was given to the newly formed Punjab Land Record Authority (PLRA) which completed it on 12th December, 2016.

The World Bank declared the project satisfactory under most heads and said that it has reduced the average time to get a fard from two weeks to 15 minutes. PLRA officials also claim that they have digitized 98 per cent of total rural land record of Punjab. 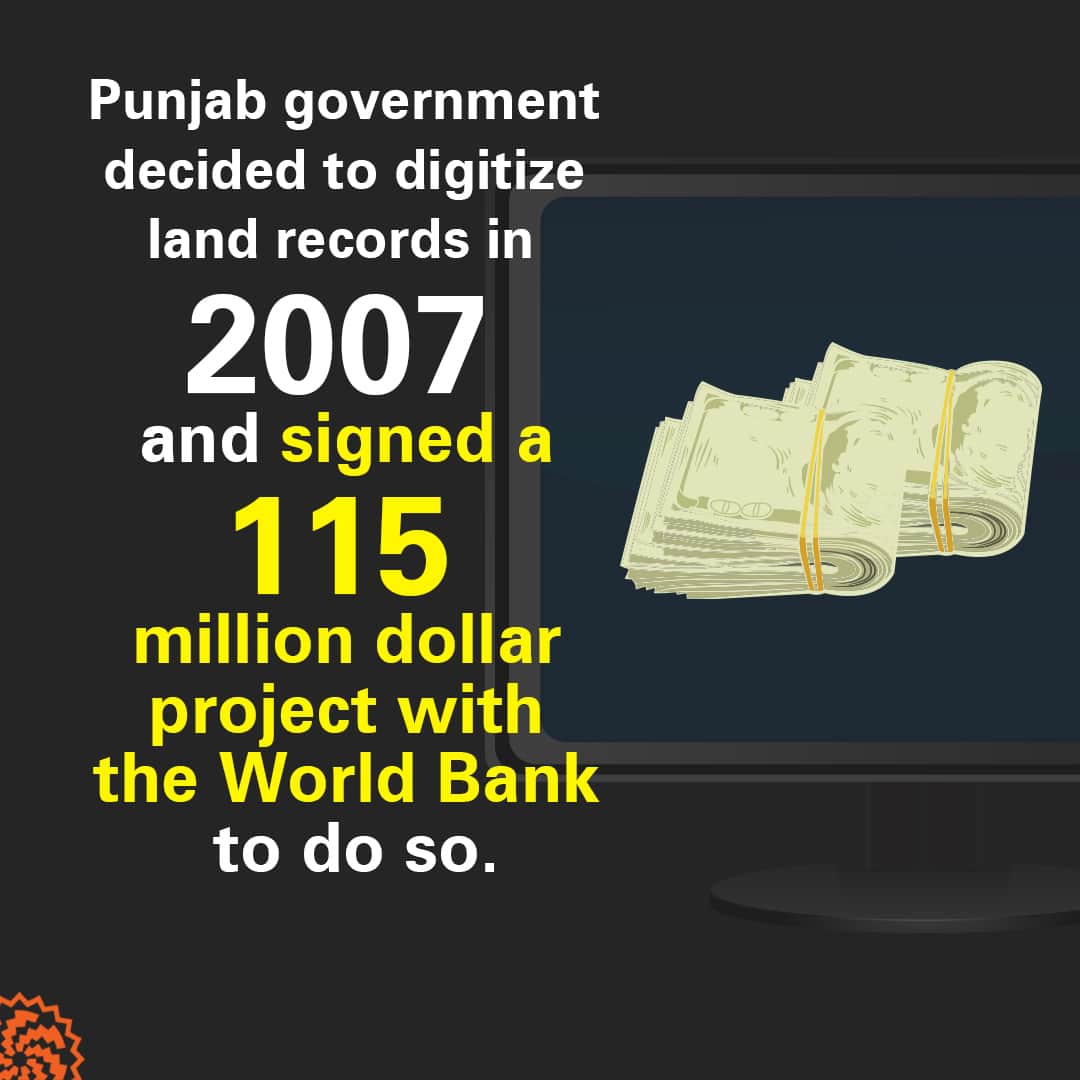 The project was publicized by the former Chief Minister, Shahbaz Sharif as a great success in uprooting ‘the patwari culture’ – the demeaning term that is used to flay snail-paced, inefficient and corrupt rural bureaucracy, mostly responsible for keeping land related records.

Patwaris have been the sole record-keepers since the times official documentation of land ownership was introduced in the region. They have been responsible for keeping records of land ownership and family trees of land owners, documenting crops sown and on-ground marking of owned lands. This authoritative and central position gave patwaris near monopoly in these matters providing them ample opportunities to play around with records and extract bribes from rural folks which earned them the reputation they have.

Around 8,000 patwaris were responsible for managing manual records of around 20 million land owners when the Punjab government decided to go digital. The project was portrayed as a revolution that will free the rural folk from patwari’s stranglehold.

But have the patwaris been dethroned by the coveted new tech system?

PLRA was, in fact, never mandated to replace patwaris. It was instead designed to work in collaboration with them. “We heavily rely on their manually maintained land record. I don’t know why people expect us to eliminate patwaris,” a spokesperson of PLRA Lahore told Sujag.

The World Bank’s project documents published in July 2017, do elaborate the patwari-centric problems in land record management but did not set his elimination as project goal. On the contrary, the reports say that the implementation phase “showed the importance of including patwaris in the overall change process, public education and management issues.” The report also discussed that the patwaris resisted the digitization and it could only move forward when they were pro-actively engaged in 2010 to 2012 and assured of their continued role and associated perks. 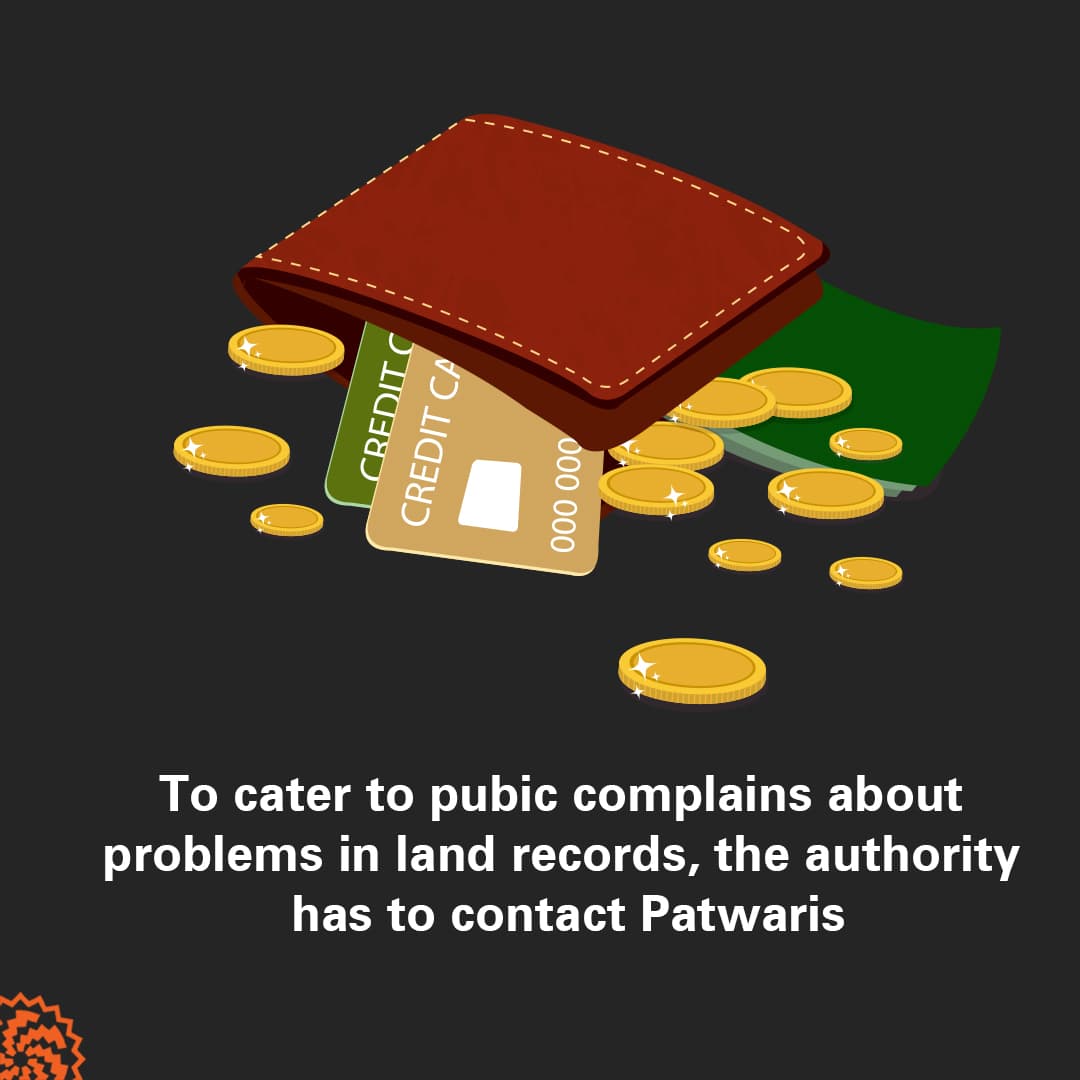 It is evident that the tall claims of ending ‘the patwari culture’ that misrepresents the PLRA’s role were made only to draw some political mileage from the project.

Double trouble: How corruption reinvented itself?

The jurisdiction of PLRA and patwaris is clearly marked. PLRA manages current land records that are the digitized form of the documents provided by patwaris. If a problem arises in any record, the Authority has to consult the patwari. Moreover, the Authority’s databases are limited to the information about which piece of land is owned by whom but the on-ground marking of that particular piece of land can only be done by the patwari and in case of a dispute, only the patwari can verify the exact status of the land.

A Lahore-based property dealer terms PLRA as merely a ‘postman’. “The Authority’s work is very good in matters of issuance of ownership certificates and registering transfers. But whenever a dispute arises, we find the Authority powerless and have to again approach patwaris with bribes,” he says. He further claimed that the patwaris now demand more bribes since they know that the Authority would not be able to solve our problems.

There have also been instances where the patwaris and the Authority officials joined hands to falsify records and commit fraud.

Consider the Royal Palm City Housing Society, Gujranwala that is being built on the land that was once part of village Attawa. Several villagers have alleged that their land has fraudulently been transferred to the Society.

One of these villagers, Riyasat Ali, was presented a transfer document of his land with official seal and his thumb impressions duly attested by the Authority. As the villager protest and approached the authorities, the Anti-Corruption Establishment, Gujranwala launched an investigation and, after a forensic examination found out that the transfer document was completely fake. It transpired that the patwari and the Authority both took bribes to transfer the land to the society without the knowledge of the real owners.

The stories of corruption in PLRA are also validated by the fact that in the last year alone around 100 of its employees were sacked over corruption charges while another 200 faced penalties as a total of 500 were prosecuted under the Punjab Employees Efficiency, Discipline and Accountability (PEEDA) Act 2006. 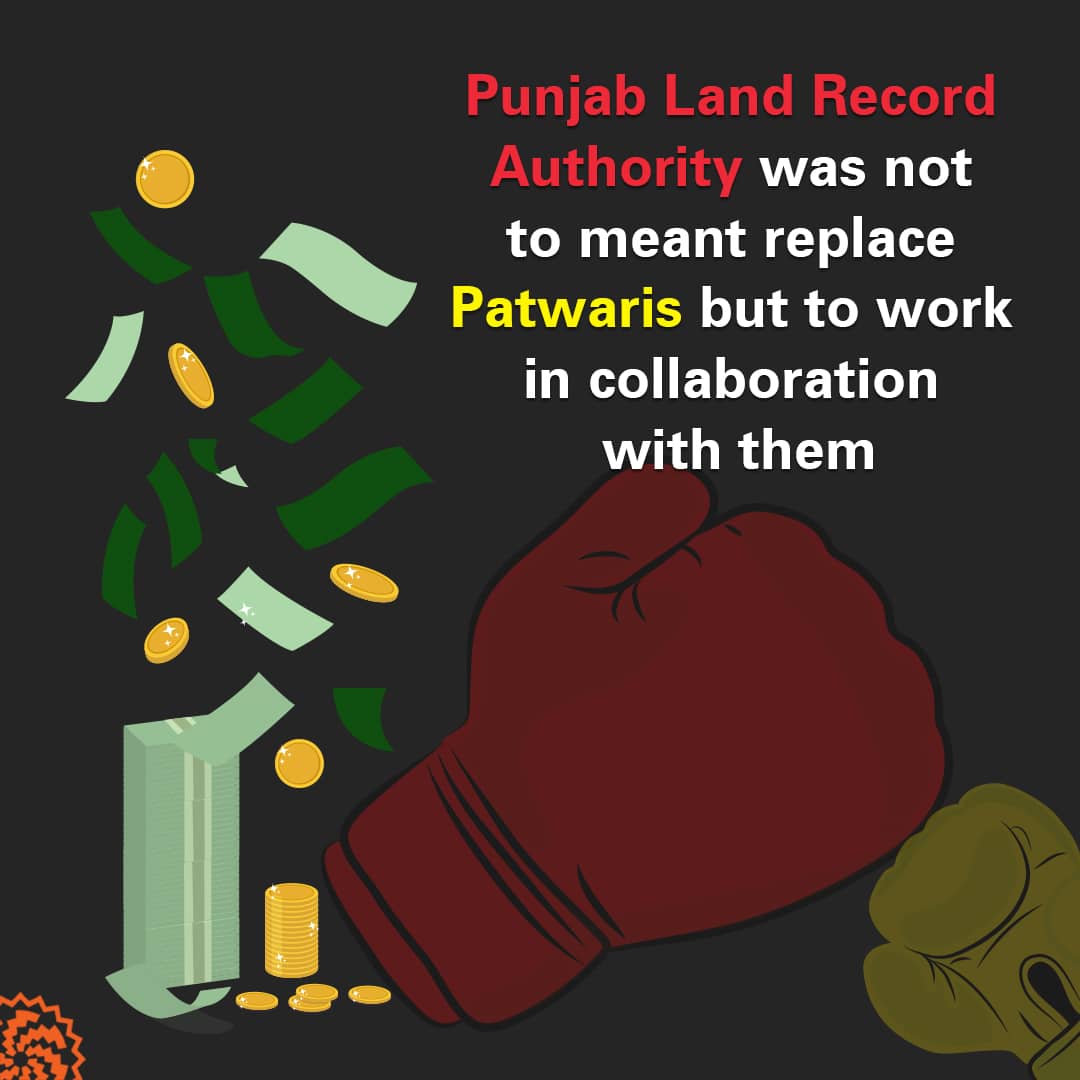 Some experts still want to give PLRA the advantage of being a lesser evil compared to the patwaris and cite the ease in getting certificates from PLRA in its defense but many others are already convinced that it has not only made matters more complicated, it has also given birth to new types of frauds and forms of corruption. “You still don’t get your way without bribery. Earlier, it was the patwari only but now it is him and the Authority officials also,” said a Lahore-based property dealer.

Patwaris threatening a comeback to recapture their traditional position

The previous Punjab government had probably started believing in its own propaganda that the digitization project will eliminate the patwari along with the reviled ‘patwari culture’ as it had stopped filling in vacant patwari posts as soon as the project was completed.
Patwaris may have born the entire brunt of all the pitfalls of country’s centuries old land record keeping system but they have certainly not been the sole beneficiary of ‘the patwari culture’.

It is believed that there is some thought among the people at the helm of affairs in the current government to halt the computerization and revive the older system in bits and pieces. It was reported in February 2020 that the divisional commissioners have been asked to allocate two revenue circles in each district to be handed over to a tehsildar and a patwari. This order, given by the Punjab Board of Revenue, also expects this ‘new’ arrangement will act as another model for land record management.

Some staff members of PLRA also apprehend that the higher bureaucracy is trying to convince the provincial government to reinstate the old patwari-centred system instead of investing more in the digital venture. They speculate that the recent plan of Board of Revenue to give select revenue circles back to patwaris will result in chopping off of 589 positions in 115 computerized record centers.

The government, however, has not publicly announced any plans to fully revert back to the old system.

Will the patwaris succeed in repulsing ‘the cyber-attack’ on their traditionally secure powerful position in our rural society or they will end up as an annoying bug in the new computerized system? It will certainly take a few more years to be finally clear.

This report was first published by Lok Sujag on 26 Apr 2021, on its old website.