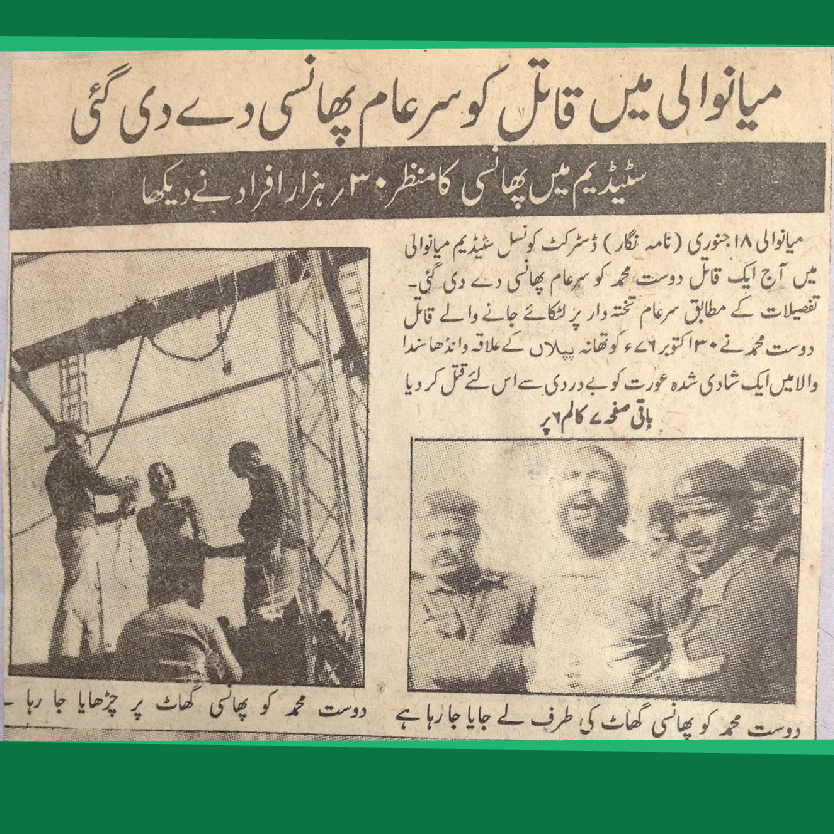 The motorway gang rape case that took place on Wednesday, 9th September 2020, has once again brought to surface demands for using hangings as a deterrent against gender violence. Prime Minister Imran Khan and some members of his cabinet have also endorsed public hangings as a panacea for gender violence which highlights the lack of understanding at the highest level about the nature and utility of such punishments. This underscores the question of whether capital punishment truly eradicates crime. Does violence begetting violence solve anything?

Claim 1: Hanging should be the only punishment for heinous crimes

The practice of hangings is not unknown in Pakistan. Since lifting the seven-year moratorium on capital punishment in December 2014, the country has hanged more than 500 people, an average of two executions per week.

In addition to that, between 2010 and 2018, over 2,788 people were sentenced to death by trial courts—an average of over 300 sentences per year. (These do not include the cases filed under terrorism charges.)

This high number of hangings and death sentences, however, has not brought down the crime rate. In fact, the incidence of crime has increased since 2013.

The Zainab murder case explains why capital punishment does not always work. In this case, a six-year-old girl from Kasur was kidnapped, raped and murdered, followed by the dumping of her body in a garbage heap. It sparked outrage across the country in early 2018. Imran Ali, her tormentor, was sentenced to death and executed in Kot Lakhpat, Lahore. But even after his hanging in October that year, cases of child abuse continued to rise across Punjab. In 2019, seven such cases were reported every day from different parts of the province. Similarly, 1489 cases of child abuse were reported in the first six months of 2020, 57 percent of which occurred in Punjab alone.

Under the military dictatorship of General Zia-ul-Haq, the flurry of public hangings became a sport, carried out before a crowd sometimes no less than tens of thousands. Consistent with Zia’s agenda, such spectacles were organized to create and promote an atmosphere of fear and silence. Here are a few facts about some public hangings that flashed the headlines during this time:

On 22nd March, 1978, a young boy Ijaz Hussain, alias Pappu, was kidnapped, raped and murdered in Lahore. His body was recovered from a pond. A few weeks later, the abductors and killers of Pappu were hanged in public in Lahore, near the Shadman Chowk. Their bodies were left hanging on the gallows for a few hours.

In 1985, Muhammad Ahmed, charged with double-murder, was publicly hanged before a large crowd in Faisalabad.
In 1988, a crowd of 30,000 people witnessed the hanging of a convicted murderer, Dost Muhammad, in Mianwali. As his dead body hung from a peepal tree in the jail, scores of onlookers chanted ‘Islam Zindabad!’

A similar spectacle was arranged in Sahiwal in 1988 when a criminal, Lalu, was hanged on the charges of robbery and murder. Special arrangements were made to make his execution visible to a large gathering and hence gallows were set in a stadium. Nearly 30,000 viewers, including children, witnessed the execution in broad daylight.

Zia also introduced ‘mobile gallows’ for quick executions. This went in tandem with the ‘speedy’ justice dispensed by the summary military courts he had set up. But no credible data indicates that the crime rate across Pakistan was affected, for better or for worse, due to these hangings. The archives of some Lahore-based newspapers alone show at least 11 cases of child rape that happened between 1983 and 1992.

Also, part of the reason why crime statistics do not seem to have registered an increase during Zia’s regime was the introduction of the Hudood Ordinances and censorship. Both together reduced the reporting of gender crimes at the time, since the prerequisite of presenting four male witnesses to prove the incidence of crimes against women before the court was but preposterous and could never be fully met. In the same way, censorship ensured that these crimes were never fully reported in the media.

Safia Bib’s case provides an apt example of this phenomenon. She was a blind woman and was raped by a wealthy landowner in 1983, making her pregnant. She reported the case to the authorities but in return was charged with fornication. The judge ruled her testimony as self-exonerating and thus inadmissible. The alleged rapist was set free due to lack of evidence while Safia Bibi was sentenced to three years of imprisonment. She was also given fifteen lashes and a fine of 1000 rupees.

In the same year, Jehan Mina, an orphaned girl, was raped by her uncle and his son. After she lodged a case with the police, the session court trying the case decided in favor of the accused, ruling that Jehan Mina’s statement was insufficient to convict them. But since she was pregnant, the court ruled that she had committed fornication. Jehan Mina was subjected to a hundred lashes and three years of rigorous punishment.

Then there are other statistics that prove that crimes did not go down in Zia’s time. In 1979, there were 70 women prisoners in Pakistan. By 1988, their number went up to 6000. A report published by the National Commission on the Status of Women in 2003 estimated that 80 percent of the women in prisons were kept there due to their failure to prove that they were raped, and were, therefore, convicted with adultery.

It is also important to highlight here that the Supreme Court passed a judgment in 1994, ruling that public hangings are a flagrant violation of human rights. The court stated:

‘According to this provision [of the constitution of Pakistan], the dignity and self-respect of man has become inviolable, and this guarantee is not subject to law but is an unqualified guarantee. Accordingly, in all circumstances, the dignity of every man is inviolable and execution in public, even for the worst criminal, appears to violate the dignity of man and constitutes, therefore, a violation of the fundamental right contained in Article 14.’

This ban on public hangings by the Supreme Court has been upheld for decades following the ruling. It came to public notice yet again when a special court hearing treason charges against former military dictator, General Pervez Musharraf, sentenced him to death. One of the judges of the Special Court said:

‘If found dead, [his] corpse be dragged to the D-chowk, Islamabad, Pakistan, and be hanged for 03 days.’

Claim 3: Hangings have helped decrease the crime rate in other countries

According to Amnesty International, a global human rights advocacy group, the top executioners in the world are China, Iran, Saudi Arabia, Iraq and Egypt. Out of these, Iran and Iraq are also among the top 50 countries with the highest crime rate.

Saudi Arabia is also infamous for carrying out a high number of public executions - scheduled every Friday at 9 am before a crowd. In cases of child molestation or rape, the beheaded body of the convict is then put on display in the public for three days to stress upon the severity of the crime.

A recent report by the European Saudi Organization for Human Rights (ESOHR), a Europe-based human rights organization for documenting and promoting human rights in Saudi Arabia, asserts that the number of beheadings in Saudi Arabia during the first quarter of 2018 rose by over 70 percent compared to the same period in 2017. It is also worth asking as to why Saudi Arabia has seen a 104 percent increase in executions between 2014 and 2019 if crime rates are declining as a consequence of all the executions.
Saudi Arabia - increase in executions from 2014 to 2019.

Based on these numbers, conventional wisdom would suggest that the crime rate in Saudi Arabia must be close to zero. Yet it is the fifth most dangerous country for women, according to the annual reports of Thomson Reuters Foundation, a London-based media organization. It is also the seventh most dangerous country in the world as far as non-sexual violence against women is concerned.

Here some people may also argue that Saudi Arabia is very different from Pakistan. It is way richer than Pakistan, and more importantly, is ruled by a monarchy, whereas Pakistan is a democratic republic. So, it could be instructive to bring the example of a country like India which is culturally and politically more akin to Pakistan than any Arab country.

In the well-known Nirbhaya gang rape case that took place in the Indian capital, Delhi, loud calls were made for the execution of the perpetrators. To satisfy these calls, India reversed its self-imposed moratorium on death penalty and, in March, 2020, hanged the four persons convicted in the case. Yet, these hangings have not brought down the incidence of crimes against women. Even now, India remains on the top of global charts when it comes to the number of various crimes related to sex and gender.

Claim 4: The only fair punishment for a heinous crime is death

This claim, first and foremost, fails to take into account the historic defects of the judicial system of Pakistan. According to a report by the International Crisis Group, a research and advocacy group, the conviction rate in Pakistani courts is abysmally low, 5-10% at best. Many a time, an accused remains in prison for a number of years as a consequence of a pending trial. Often, people facing trials spend large parts of their lives behind bars, waiting for their convictions or acquittals to become final. What makes this system of crime and punishment really troubling is the fact that the Supreme Court overturns convictions in as much as 78 percent of all cases decided by the lower courts.

Mazhar Hussain, a 19 years old man charged with murder, was sentenced to death after a trial based on misinformation. Twenty four years down the lane, the Supreme Court acquitted him of all charges.

The case of two brothers, Ghulam Sarwar and Ghulam Qadir, flashed the headlines in 2002 when they were convicted of a murder by a trial court. Fourteen years following their conviction, the Supreme Court ruled that the evidence provided against them before the trial court was riddled with discrepancies. The apex court’s decision, however, failed to serve justice as the two brothers had already been hanged in the preceding year.

The Human Rights Commission of Pakistan proclaimed their execution to be “a stark reminder of the criminal neglect of the justice system.”

The average prisoner spends 11 years on death row before execution.

Since the lifting of the moratorium, at least 13 prisoners have been executed after spending more than twenty years on death row—effectively being executed after already having served a de facto life sentence.

Typically, a prisoner waits for 10 years before his/her appeal is heard before the Supreme Court.

This report was first published by Lok Sujag on 23 Sep 2020, on its old website.