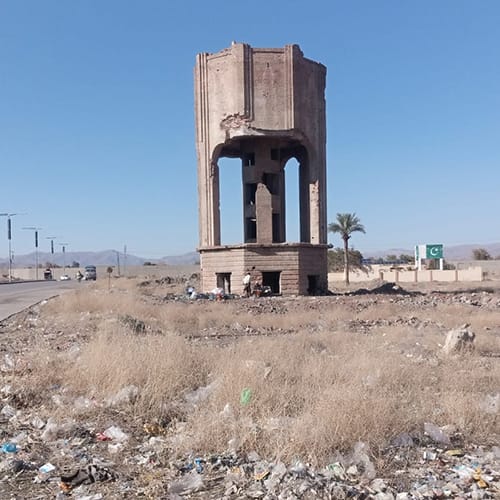 He was quite well off a few years ago, he says, as he used to work as a middleman in Miranshah's vegetable market. He would import fruits worth millions of rupees on a daily basis from Afghanistan and other Central Asian countries and delivered them to many cities of Pakistan.

His business, however, got shut down after a military operation called Zarb-e-Azb was launched in June 2014 against religious militants based in North Waziristan. He also had to leave his home and move to the nearby district of Bannu in such a hurry that he did not have time to collect his business ledgers from his shop.

When Khairullah returned to Miranshah three years later all that was left of the vegetable market was a water tank. His shop used to be right below that tank, he says, and adds that a large part of the city, including the vegetable market, had been destroyed during the war between the military and the militants.

“I also lost all records of my business accounts due to the destruction of my shop,” he says. So, he does not remember how much money he owes to people and how much others owe to him. He, however, claims to have suffered an overall loss of millions of rupees. “Today I don't have enough money even to send my children to school while my creditors are constantly demanding their money back,” he says. 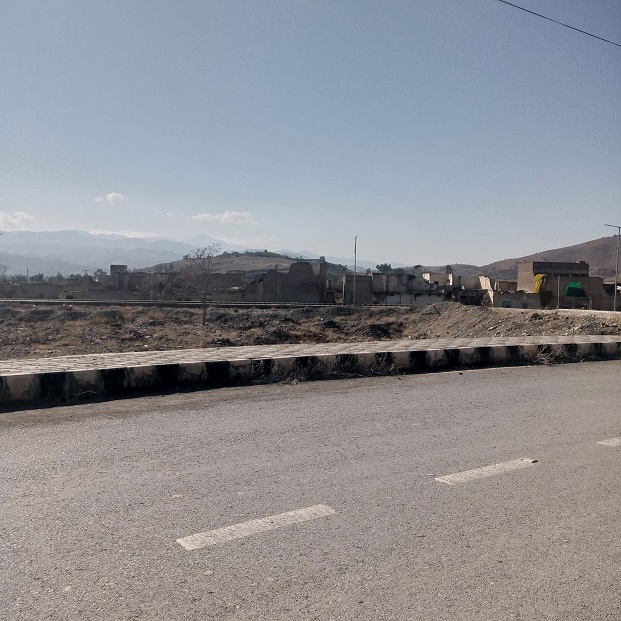 He believes that his financial situation can only improve if the government compensates him for the destruction of his shop. The owners of hundreds of other shops destroyed in Miranshah have the same demand.

One of them, Shah Phool Khan, used to run a cosmetics shop in Miranshah bazaar. Like all other residents of North Waziristan, he had to leave everything behind and go to Bannu due to the military operation. After the operation ended in 2017 and he came back to his native district, he found that both his home and shop had been reduced to rubble. So, he went to Bannu again along with his family.

Two years later, he returned to North Waziristan and opened a small cosmetics shop at Degan Adda, a village located 25 kilometers west of Miranshah. Now he wants the government to compensate him for his loss so that he can use the money to expand his business.

In order to get his demand accepted, he says, he has to travel to government offices located in different parts of North Waziristan which is stretching his limited financial resources even further.

Eight years ago, Imshadullah used to sell car engines and spare parts at a bus stop located in the center of Miranshah. He says he used to do business worth around 150,000 rupees a day. The military operation put an end to all that and rendered him penniless, he says.

Since 2017, he has been demanding, along with other traders from North Waziristan, that they be paid compensation for their damaged shops and businesses. “Initially, we met with the locally-based civilian and military officials to present our demands but no one listened to us,” he says.

They later staged several protests which eventually drew the attention of Khyber Pakhtunkhwa provincial government to what he calls their “pitiable economic condition”. Subsequently, local elders, journalists and senior civil and military officials held a jirga in early 2018 and passed a unanimous resolution, calling on the provincial government to do a detailed survey of all the business lost in North Waziristan due to the military operation and compensate their owners.

A delegation of the traders affected by the losses then met the head of the army's Inter-Service Public Relations (ISPR) section on April 20th, 2018. Consequently, an agreement was reached between the North Waziristan Traders Association and the government on the modalities for the payment of compensation. On August 22nd, 2018, the head of ISPR met with tribal elders and businessmen again. It was decided after that meeting that the local assistant commissioner and military officials would jointly carry out a survey of the losses in the first phase of the payment process. 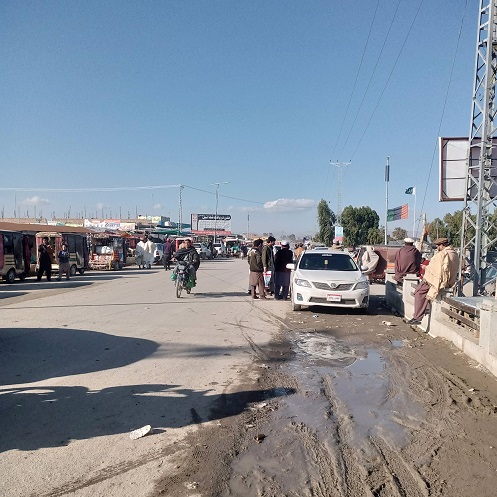 The survey’s report, presented a few months later, stated that a total of 6,969 shops collectively worth 21 billion rupees were destroyed in North Waziristan. In the light of these figures, Khyber Pakhtunkhwa government set up a special committee of government officials to verify individual losses and start compensating the traders accordingly.

The owners of all the shops and petrol pumps destroyed in Mir Ali, the largest town in North Waziristan, were soon compensated as per the recommendations of this special committee. But the payment of compensation to the traders in Miranshah and elsewhere continued to face delays. This led them to stage several protests within their district in March 2019 and later in Peshawar in January-February 2020.

But, instead of listening to their demands, the deputy commissioner of North Waziristan issued a notification on July 19th, 2020, disbanding the special committee set up for the verification of damages and the payment of compensation. He says he did this because he believed that the traders were misquoting their losses and exaggerating the value of their shops. He simultaneously formed a new committee comprising government officials that would make the traders swear under oath that they were not lying about their losses.

In addition to the oath, Imshadullah says, the new committee demands evidence that is impossible to provide. This, according to him, is because people could mark their shops by looking at the ruins of the bazaar in 2018-2019 but now that the debris has been removed and the whole market has been turned into a barren plain, there are few, if any, clues of the businesses that once stood there. Without the help of those clues, he says, most local merchants are no longer able to locate their own shops.

He also complains that a new criterion is being set for the traders of Miranshah while the merchants of Mir Ali have been paid on the very recommendations of the disbanded special committee. 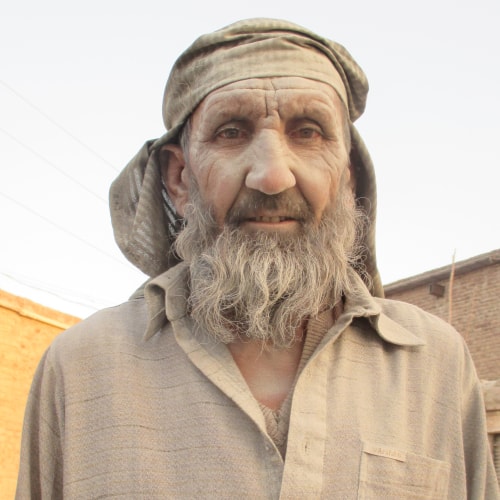 It was on the basis of such complaints that the traders of Miranshah filed a petition at the Bannu Bench of the Peshawar High Court against the formation of the new committee. Its judges, Justice Shahabzada Asadullah and Justice M. Naeem Anwar, not only declared the deputy commissioner's notification null and void, they also restored the special committee that was working before the issuance of the notification. They wrote in their judgement: “As the petitioners and all concerned have suffered great financial losses, so it would be appreciable if the Provincial Government takes keen interest in distributing the allocated funds among the [a]ffectees, within a period of three months.”

Despite this clear order, says Imshadullah, the government has not yet paid any compensation to the traders of Miranshah. On the contrary, the provincial administration has challenged the Peshawar High Court's decision in the Supreme Court which has suspended its implementation for the time being.

Shahid Ali Khan, deputy commissioner of North Waziristan, says the re-verification of shop ownership is not his personal decision but he is doing so to follow the orders of the Khyber Pakhtunkhwa cabinet. The provincial cabinet, according to him, has decided that “no payment to shopkeepers can be made without first ascertaining the ownership of the destroyed shops.”

Talking about the need for this verification process, he says that many traders of Miranshah have made false ownership claims. Citing some such claims, he says: “Some people are claiming ownership of shops originally owned by Afghan refugees while the president of North Waziristan Traders Association has claimed the ownership of 20 shops when, in fact, he owned only two.”

Similarly, he says, 134 sanitation workers belonging to the local Christian community have also claimed ownership of the shops when “everyone knows that they did not have a single business in Miranshah.”

He believes that many demands being made by the affected traders are also unfair. For example, he says, many of them want the government to increase the price of their one-marla (272-square-foot) shop from 1.5 million rupees to 4.5 million rupees.

Similarly, he says, “the people who had rented shops do not want to be paid 300,000 rupees per shop and instead demand that they be paid 3,500 rupees per square foot of the shops they ran.”

He is also not happy with the payments made to the traders of Mir Ali as per the recommendations of the special committee. “Many issues in these payments are now coming to light” which are being investigated by the National Accountability Bureau (NAB). “Even some students posed as shopkeepers and received compensation,” he alleges.

Khonamir Khan, a businessman from Miranshah, however, says that “the government should not punish the real claimants because some people have made false claims”. Prior to June 2014, he used to run a warehouse in Zafar Town area of Miranshah wherefrom, according to him, he used to sell flour and sugar worth millions of rupees on a daily basis to local shopkeepers. He says the value of his business can be verified from the mills which used to supply flour and sugar to him. On the contrary, he says, “the compensation the government is giving me is not even one percent of my loss.”

He, though, is willing to accept even this small amount, provided there is no further delay in it because, according to him, “I am now unable to even buy flour for my own house without taking a loan.”