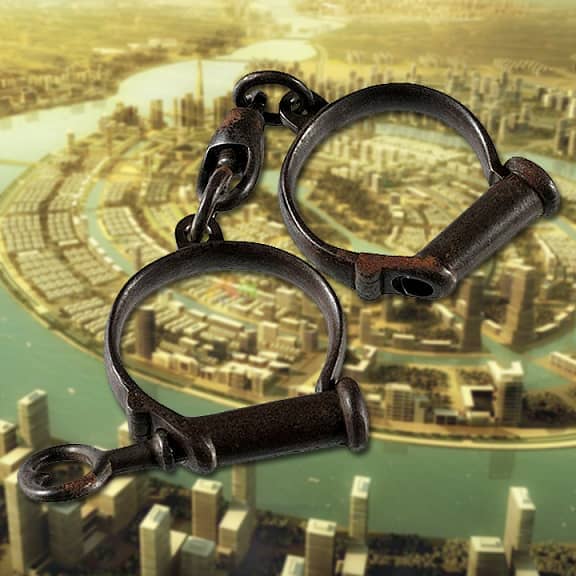 Some farmers sitting under a jamun tree at Dera Noor on the bank of river Ravi are talking nostalgically about Dulla Bhatti, the Punjabi hero who revolted against the Mughal Empire. The police have arrested five farmers from some nearby villages during the previous night and they are wondering which one of them could speak out against this action taken by the state -- just as Dulla Bhatti did.

They believe that only someone belonging to the Bhatti tribe could do that so they consider Nazir alias Baoo Bhatti as someone who could come up to their expectations.

Baoo Bhatti has been arrested for the first time in his 60-year-long life and is more worried about how upset his five daughters would be in his absence from home than about anything else. The police kept him in a police station in Ferozewala tehsil of Sheikhupura district after his arrest.

A resident of a village called Gol, he was apprehended from his house on the night between 15th and 16th June this year. “My daughters screamed in horror when the police came in four vehicles to raid my house. The policemen broke down the entrance of the house to arrest me,” he says. 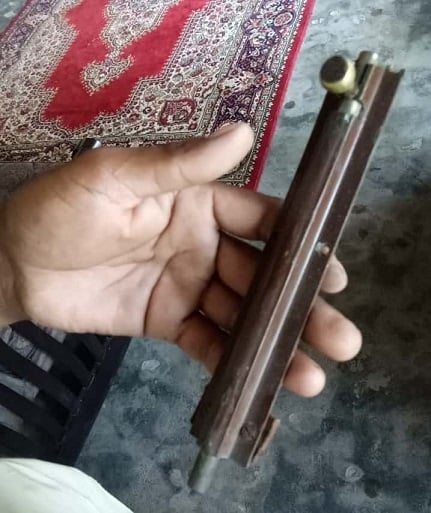 Policemen broke down the entrance of the house to arrest farmers.

The police conducted a similar raid that night in Dera Noor to arrest a local landowner, Salman Sajjad Warraich. Some policemen climbed over the walls of his house, broke down its entrance and arrested his son, Faqir Muhammad Warraich. His family alleges the police also took away two mobile phones during the raid.

Shahid Rafique Chambal, station house officer at Ferozewala police station, defends these raids. He claims that, in cognizable offences, the police have the power to arrest the accused from anywhere and through any method.

The police have also arrested three other persons besides Baoo Bhatti and Faqir Muhammad Warraich. They are Munir alias Bagga Bhatti, Muhammad Latif son of Saleem Arain and Dilshad. The police are still looking for two others, Salman Sajjad Warraich and Amir son of Riaz, who have been granted protective bail by a court. Raids are also being carried out to find a few other unidentified accused.

The police say the arrests have been made after a first information report (FIR) was filed by the Ravi Urban Authority (RUDA), claiming that the accused illegally interfered in the government’s business. RUDA alleges in the FIR that its personnel were visiting some government lands along with the employees of Ferozewala tehsil’s revenue department on 15th June 2021 when an unidentified local resident (later identified as Baoo Bhatti by a revenue clerk) got along with them. When the RUDA staff was returning from its visit, the FIR states, that Salman Sajjad Warraich, accompanied by ten motorcyclists, stopped them on their way at around 11 am. The other details given in the FIR can be summed up as follows:

“When the RUDA officials asked him as to why he was blocking their way, he started abusing them and questioning them about the purpose of their visit. He also asked his associates to make a video of the officials. When they tried to clarify the purpose of their visit, Salman Sajjad Warraich did not listen to them and continued to use abusive language and threats against them. Baoo Bhatti and his associates, meanwhile, snatched official documents from a revenue clerk and Salman Sajjad Warraich forced him and other RUDA officials to write and sign a document. He later called more people to the site of the clash to help him hold the government officials hostage for two hours.” 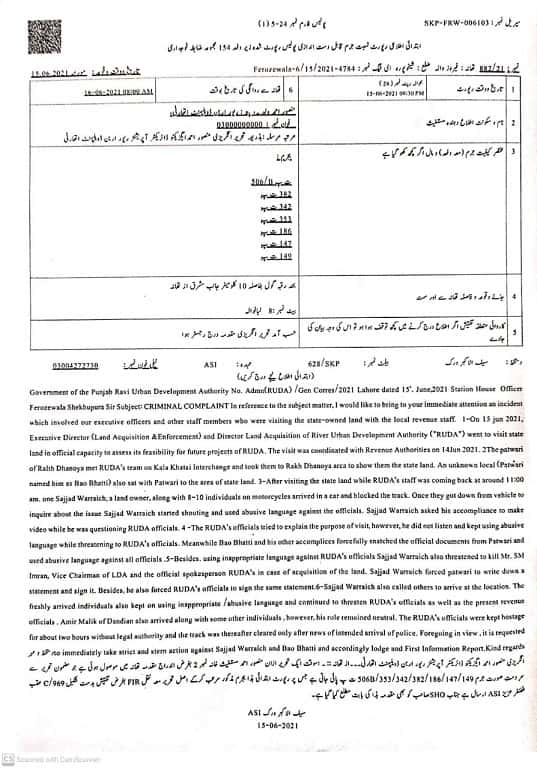 The farmers living in various Ferozewala villages, however, deem the FIR as false and call it a ploy by the government to acquire their agricultural lands for a housing project called the Ravi River Front. They claim the incident recorded in the FIR has not even taken place. They also say the arrests were a vindictive measure by RUDA because Salman Sajjad Warraich’s wife and son Faqir Muhammad Warraich had filed petitions in the Lahore High Court to have the work stopped on the Ravi River Front.

Baoo Bhatti similarly says the “only reason for my arrest is that I do not want to give my agricultural land to the Ravi River Front”. Salman Sajjad Warraich also denies the allegations made in the FIR. He and his associates had only shown the visiting government officials a Lahore High Court order which states that no work could be done on the project currently, he says.

The FIR registered by the police also has a few flaws. For example, the applicant’s phone number given in it is invalid. Similarly, his father’s name is missing. In fact, the police have turned a letter written to them by RUDA’s director operations, Mansoor Ahmad, who also happens to be a former army officer, into the FIR. He has neither been called to the police station to verify the contents of his letter nor have the police conducted any investigations on their own to cross-check his allegations before arresting the accused.

The farmers also say the registration of this “false” FIR is not something new for them because their trouble with the authorities started shortly after the Ravi River Front project was launched last year. The first case in this regard was filed on 2nd March 2021 against 80 to 90 farmers by the Punjab revenue department on charges of snatching government documents, interfering with the government business and rioting.

The farmers, however, say they are ready to fight against RUDA at every forum that they can. Baoo Bhatti, who has been released on bail, does not want to revolt against the state as Dulla Bhatti did but he says: “My agricultural land is everything I have. I will protect it at all costs from being taken over for the Ravi River Front.”

This report was first published by Lok Sujag on 2 Jul 2021, on its old website.