Fertilizer shortage in Sindh and Punjab a harbinger of wheat crisis in Pakistan?
English
English 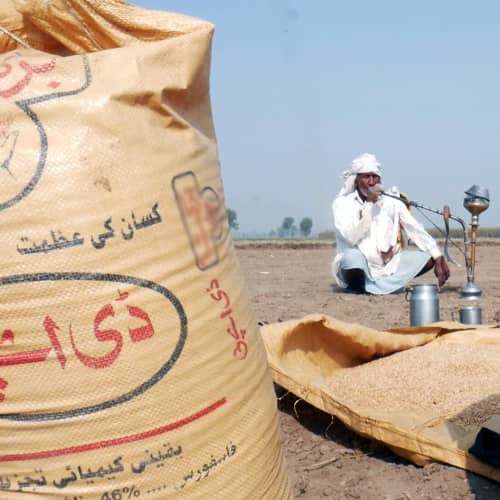 Malik Muhammad Ismail has dreams thwarted and intercepted by his meager means, dreams that seem increasingly out of reach as the cost of farming grows while his crop yield and income struggle to keep up with inflation.

As he sows wheat in his farm with help from his children, he is thinking about saving money for the marriage of his 24 years old daughter and education of his son, who is 16. "At the same time, I am worried that the crop may fail because of inadequate amount of fertilizer as it is either unavailable or too costly due to low supply," Ismail said.

Ismail said that a bag of diammonium phosphate or DAP, weighing 50 kilogrammes cost over 10,000 rupees. The price for a same amount of urea had also surged up to 2,500 rupees when a bag of urea was available for 1750 rupees just a few weeks ago.

However, now even urea was not easily available. Ismail said that traders hoarding stockpiles of urea would prefer selling it to large farm owners who have the means to pay in cash the exorbitant cost. On the other hand, small farmers like Ismail who owns four acres of land, usually get fertilizer on loan.

Ismail’s landholdings are located in the village Chak 184/9 L of Sahiwal district in central Punjab. He said that one needed two bags of DAP and a bag of urea for the wheat crop grown over an acre of land in his village. Otherwise, the yield of the crop would drop by 10 to 15 per cent.

Ismail has only been able to make available a single bag of DAP for an acre of wheat crop. He had purchased it for 8000 rupees about two months ago when it was cheaper. On the other, he has been unable to purchase urea because he can no more afford it.

“I will try to purchase urea to ensure a good yield when I water the crop for the first time 20 days from now,” he says as if trying to reassure himself in face of the growing odds to make fertilizer available in time for his crop.

Like Muhammad Ismail, many wheat growers in Punjab and Sindh complain that due to the sudden price hike and shortages, they are finding it difficult to use the required amount of fertilizer for their crops. Many of these farmers are growing wheat now without using fertilizer.

Osama Mohmand, a farmer from the Bahawalpur district and another, Awais Khan from Rahimyar Khan, have not used any fertilizer for wheat crops grown on 11 and 2.5 acres of their lands, respectively. 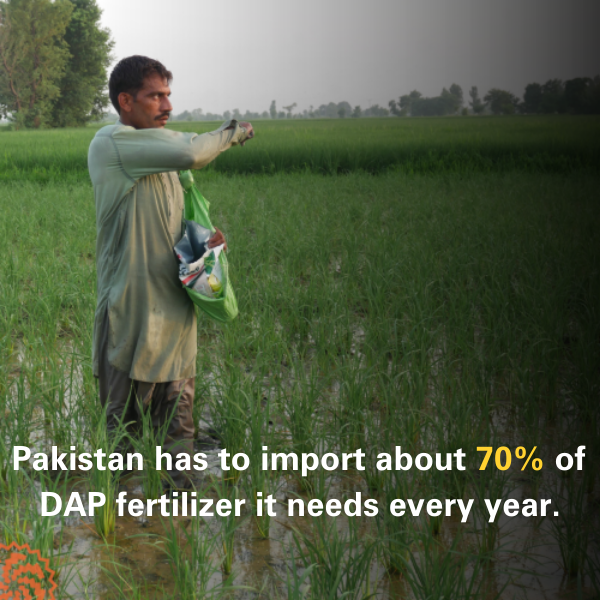 Increasingly though, even major landowners are feeling the pinch of rising prices, finding it difficult to provide the fertilizer needed for their crops. Zahid Bhurgri, a farmer from the Mirpur district who is also secretary of the Sindh Chamber of Agriculture, could not get enough fertilizer for the crop of wheat grown over 100 acres.

Bhurgri said that like Punjab, a bag of DAP cost 10,000 rupees in Sindh, while the price of urea had gone up to 2500 rupees. “At these prices, it costs farmers 22,500 rupees to grow wheat over an acre of land,” he said, adding that most of the farmers were unable to afford that. "Because I have failed to use fertilizers, my per acre yield could drop by 400 kilograms."

Shaukat Ali Chadhar, president of Pakistan Kissan Board, a non-government organisation, said that due to limited use of fertilizer the wheat yield was likely to drop by 30 per cent this year. However, he said that this drop would not affect the farmer as much as it would affect the national economy.

“Due to less production, Pakistan would have to import wheat from other countries at a much higher cost,” Chadhar said.

What led to fertilizer shortage?

The National Fertilizer Development Centre (NFDC), a government organisation responsible for tracking fertilizer production and prices, in a report in November last year said that there was no shortage of DAP and urea in Pakistan. On the contrary, the country had both the varieties in excess of demand.

The report stated that at the start of the sowing season in October 2021, over 14 million bags of DAP were available in Pakistan while the farmers' needs stood at 6.8 million bags.

Similarly, around 13 million bags of urea were also available in the country in October 2021, which was 2.8 million bags more than the actual requirement. 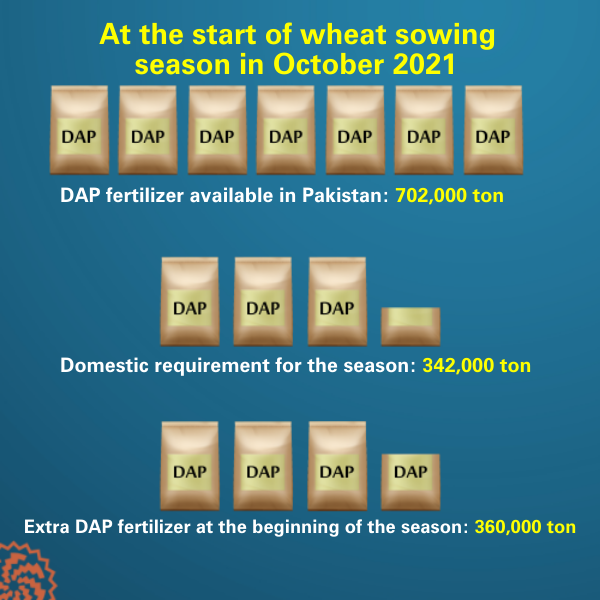 However, a senior NFDC official blamed fertilizer companies for the shortage that multiplied the farmers’ fertilizer woes. “A meeting of the Federal Ministry of Industries and Production that took place in the last week of November last year was informed that some of the manufacturers had provided certain major dealers with fertilizer stockpiles more than their requirements," the official said.

The companies, he said, did not provide a single bag to small dealers. "A dealer from a district with a requirement of 500,000 bags was supplied over 250,000 bags, who hoarded the stockpile for black marketing."

The official said that the meeting also pointed out irregularities in geographical distribution of fertilizers as these companies supplied some districts with stocks several times higher than their requirements while other districts received far less than their needs.

A comparison of record of the geographical distribution of fertilizer showed that Punjab received four per cent less urea than its share in 2020, while Sindh was provided 52 per cent more than its share last year.

Dealers also blame the fertilizer companies for the shortage.

Chaudhary Shahid, a local dealer from the Jahanian tehsil of Lodhran district in Southern Punjab said that in the past they used to receive 3000 bags from fertilizer companies before the start of sowing season. This time around, said Shahid, he received only 300 bags of fertilizer over the last two months.

Rana Iqbal, a major fertilizer dealer from South Punjab also claimed that companies made available supplies after an undue delay this year, causing shortage at the time of wheat sowing.

“I received my fertilizer quota about four months after booking,” he said. 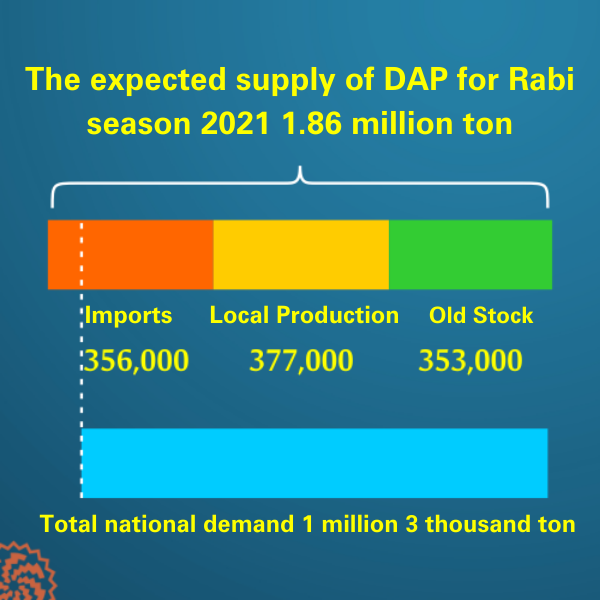 However, fertilizer companies deny supplying more or less than the required quota to any dealer anywhere, district or province.

He said local dealers informed fertilizer companies about the demand in their respective areas before the sowing season. The same procedure was also followed this year, he said.

Rashid said it was incomprehensible that a company would not supply fertilizer to an area with higher demand because companies want to sell more of their fertilizer.

“It is not companies but investors and traders, who sensing a rise in international prices, hoard large quantities of fertilizers that they were now selling at exorbitant prices,” he said.

Sher Shah Malik, Executive Director of advisory council of the Fertilizers Manufacturers of Pakistan, said that urea price had witnessed extraordinary increase globally.  However, due to cheaper local prices, middlemen and dealers sell it in the black market.

In an interview with the English language daily The News  in November 2021, he said that urea sales between January to October that year had surpassed the sales record of the past decade.

He said that in the first 10 months of the year, a total of 102 million bags of urea were sold in Pakistan, whereas in the preceding year, the figure was 92 million bags.

"One can infer from this that many investors and traders are hoarding fertilizers for the past many months," he said. "A crackdown against urea dealers wherein more than 5.1 million bags of urea were recovered from hoarders also substantiates this assertion."

The recovered urea bags were sold to the farmers at the rate of 1,768 rupees per bag.

Meanwhile, the federal government blames the Sindh government for the shortages and rise in prices of fertilizers.

Federal Minister for Industries and Production Makhdoom Khisru Bakhtiar told a meeting in late October about the distribution of urea, saying hoarders had stockpiled large amounts of fertilizer in Sindh and the government had failed to take action against them.

However, Umair  Masood, a leader of the Pakistan Kissan Board said that the situation was no better in Punjab.

He said that local authorities had failed to act till the end of November despite reports about unavailability of fertilizers pouring in for the past many weeks.